Set on a magnificent private estate in the heart of Chianti, Ca di Pesa is a beautifully restored villa with far-reaching views across a rich tapestry of Tuscan hills. The origins of the villa date back over 1000 years, when the property formed part of a traditional borgo, with an interior courtyard and impressive stone facade. The timeless setting and historic charm of Ca di Pesa still prevail to this day, although its attentive owners have brought the amenities of the villa well into the 21st century, with welcome additions such as air-conditioning in the bedrooms, a home movie theater and perfectly-positioned swimming pool. Guests are invited to enjoy a complimentary tasting of the estate's highly acclaimed wines, the perfect introduction to this Chianti retreat.

Nine of the villa’s twelve guest rooms are divided between the first and second floor of the attractive main house, with a tenth to be found high in the torre vecchia, the old tower, with corresponding spectacular views. A further two rooms can be found in the attached casina, available for groups of over eighteen guests. Ample living space can be enjoyed indoors, although  guests will undoubtedly be drawn to outdoor living during the summer months: lazy long lunches under the shade of the loggia, taking in the hypnotic views from the swimming pool or simply a leisurely game of bocce.

For a true immersion into traditional Tuscan life the villa is just a 15-minute drive from Panzano, where one can join in the chatter and bustle on market day, pause for an invigorating espresso and delicious pastry, before perusing the small artisanal boutiques. Within a 20-minute drive are many of the highlights of Tuscany, including the villages of Greve in Chianti, Badia e Passignano and Castellino in Chianti, with their historic piazze, lively trattorias and inviting wineries. The surrounding hills lend themselves to walking and cycling, the walk from Greve to ancient Montefioralle a particularly rewarding one.  A little further afield, the medieval towers of San Gimignano, the leaning tower of Pisa, and the Renaissance city of Florence are all easily accessible for day trips.

WHY WE LIKE IT:  The views of the Chianti hills from Ca Di Pesa are just sublime, in a region that calls for exploration and Tuscan adventures. 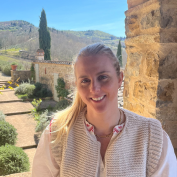 Please note additional charges may apply. See Extras & Booking Notes section for details. 2023 prices are indicative only and subject to confirmation at time of enquiry.
Based on occupancy of up to 22 guests

Great choice! You are enquiring about:

Please note additional charges may apply. See Extras & Booking Notes section for details. 2023 prices are indicative only and subject to confirmation at time of enquiry.