More dazzling than any Hollywood special effect, the Northern Lights are one of nature’s greatest spectacles. Here are our recommendations for where to stay to catch the show.

The same extreme reaches of northern Europe that promise endless days of sunshine in summer provide something just as remarkable in winter: the Aurora Borealis (‘dawning of the north’) or Northern Lights – shimmering arcs of dancing light that sweep their way across the dark night skies.

Thought in Norse mythology to be reflections from the shields of the Valkyries as they carried fallen warriors from the battlefield to Valhalla, the lights are in fact caused by solar winds (streams of particles charged by the sun) colliding with different gasses in the atmosphere. The nature of the gas determines the colours produced by the collision. Incoming particles most commonly hit at an altitude of around 62 miles, where the predominant gas is oxygen, producing the vivid greens so often associated with the Northern Lights. Reds, purples, pinks and blues are also seen but are far less common – caused by collisions with lower-lying nitrogen – while rarest of all are the brightest blues and reds, the spectacular result of violent collisions with high-altitude oxygen.

As for the ‘dances’ that the lights perform – swirls, flickers, billowing arcs and waves like lines of falling dominoes – these are the result of particles being pulled in all directions by the Earth’s magnetic field.

The lights are at their best in the ‘aurora zone’, between 60º and 72º north, a curve that extends across northern Scandinavia, Iceland, southern Greenland and northern parts of Canada. They are at their most frequent between December and March – though are sometimes visible as early as August – and are most often seen between 6.00 pm and 2.00 am.

Even then, however, sightings can’t be guaranteed. Our best advice is to be patient, and to stay in a known aurora area for as long as possible, well away from artificial city lights. Our suggestions below fit all these criteria, combining luxury accommodation and attentive service with some of the best opportunities for witnessing one of the most magical sights on Earth, as well as promising plenty to do when the cosmic lights aren’t dancing.

“So sadly neglected and often ignored, a poor second to Belgium when going abroad,” was how the Monty Python boys lamented Finland’s lowly status as a tourist destination. We too share their sorrow and astonishment, for this Nordic gem is one of Europe’s least spoilt corners, and with over 200 displays in any given year, one of the most reliable for spotting the Northern Lights. 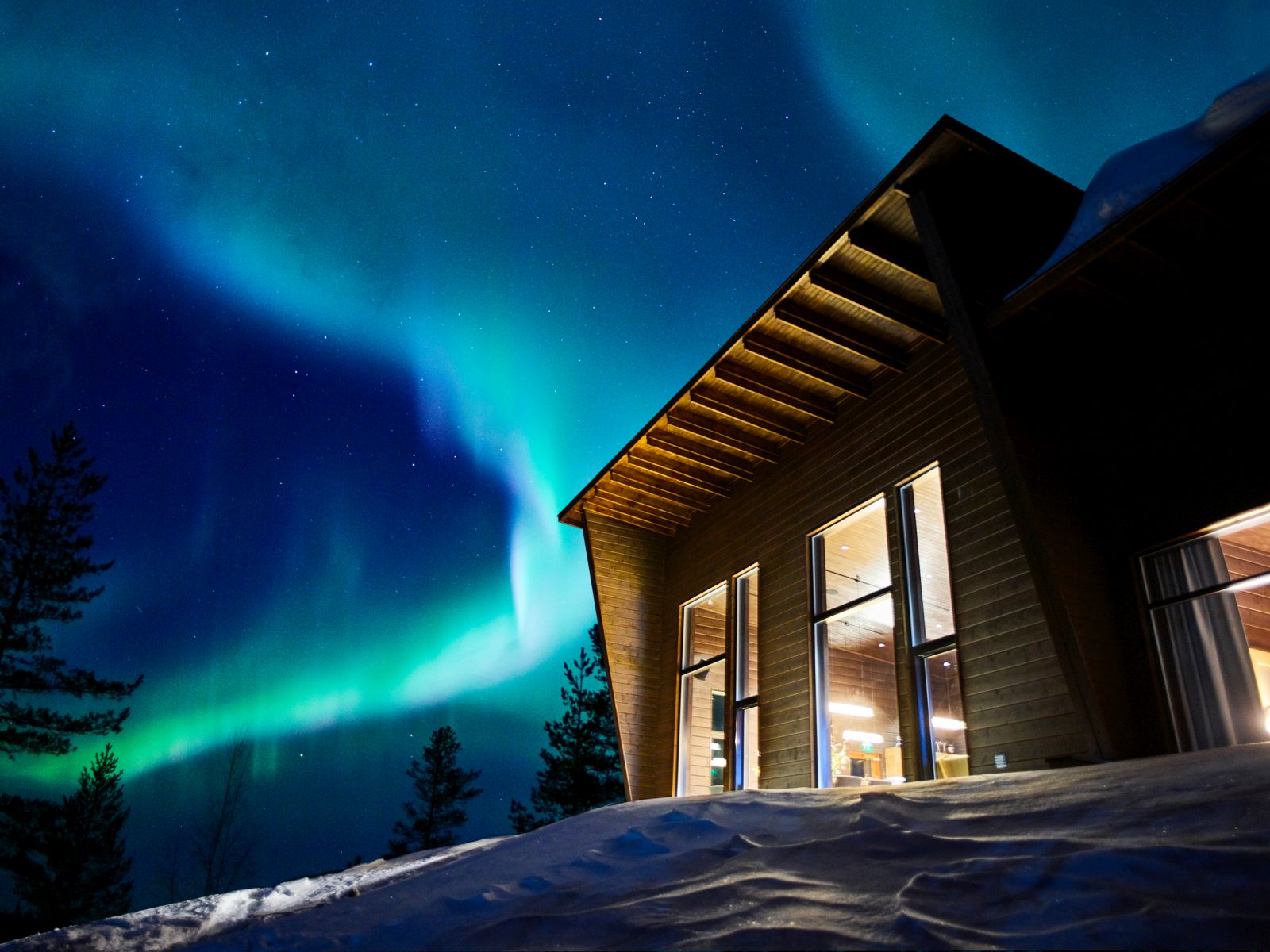 As experts in luxury hotels, we’ve seen some truly stunning properties over the years. Few compare to Octola. Sitting on more than 300 hectares of expansive snowy wilderness, with breath-taking views from every window and reindeer bounding all around, this ten-suite lodge provides the ultimate in Arctic extravagance. You can choose to book a wing of either four or six suites or take the entire lodge for guaranteed privacy. Best of all everything is included, from the private butler and wilderness guide to a dedicated team of local staff who will make you feel like royalty (perhaps because members of various royal families have already stayed here). And just when you think it can’t get more magical, there’s a very good chance that the Northern Lights will appear in the skies above – a definite advantage of being north of the Arctic Circle. 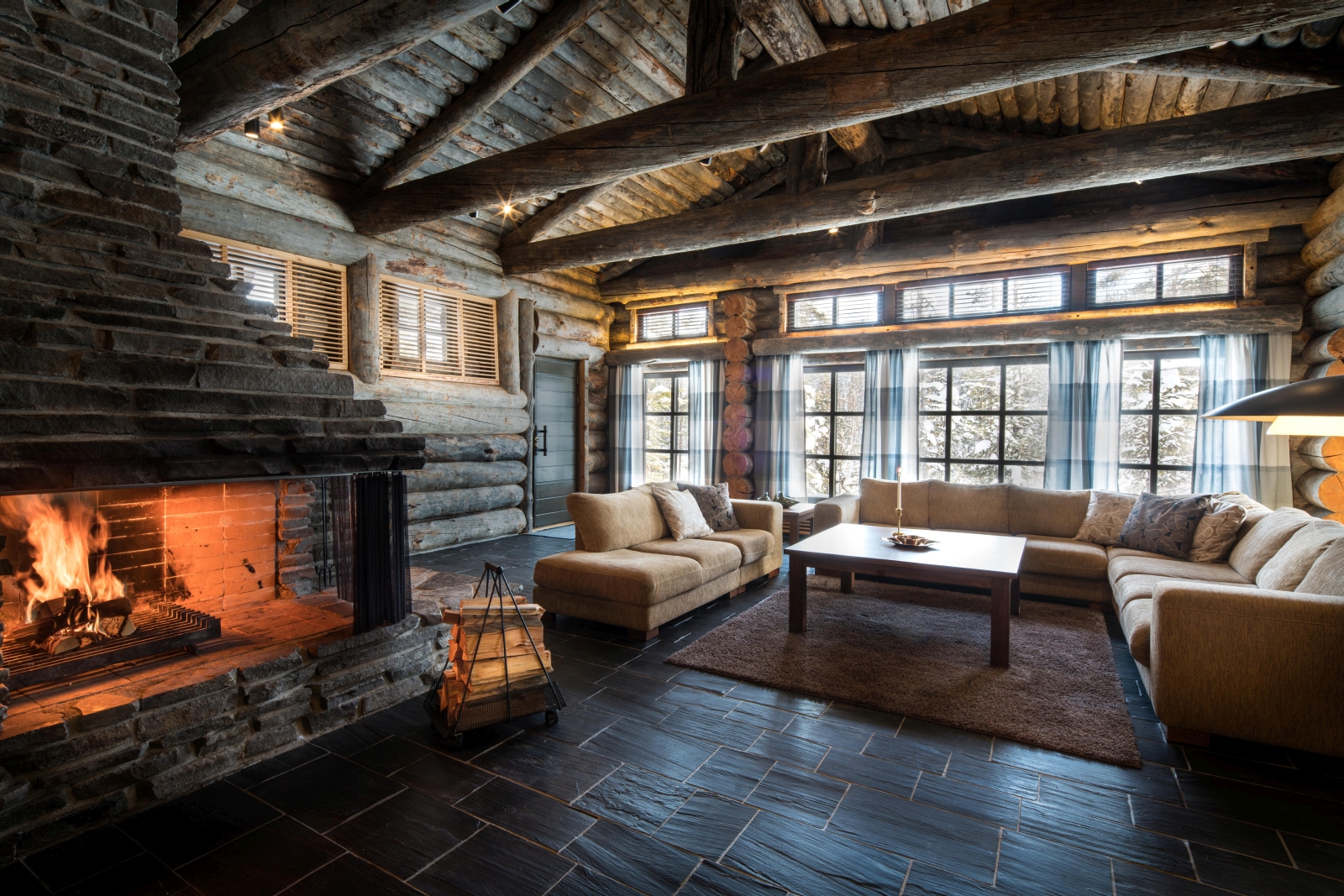 Finland has led the way in inventive accommodation for seeing the Northern Lights but if you’re a traditionalist, nothing beats returning from an aurora hunt to a cabin in the woods and a roaring log fire. Situated on the edge of Pallas-Ylläs National Park, L7 Luxury Lodge is perhaps the finest of all Finland’s log cabins. Despite being just a few miles away from the village of Äkäslompolo and the ski resort of Ylläs, the lodge is truly in the wilderness and away from any light pollution, making it perfect for spotting the Northern Lights. There’s even a touchscreen aurora forecast board to help tell you when to look. The best spot to watch them is the outdoor Jacuzzi, though the large picture windows in the spacious living room and in each of the seven bedrooms provide excellent viewing too.

The turquoise glacial lagoons, basalt outcrops, tumbling waterfalls and jagged volcanic mountain peaks of Iceland make a uniquely dramatic backdrop for the Northern Lights. Iceland is Europe’s most sparsely populated country, and the minimal light pollution affords high chances of witnessing the skies in vivid technicolour, especially in the north. 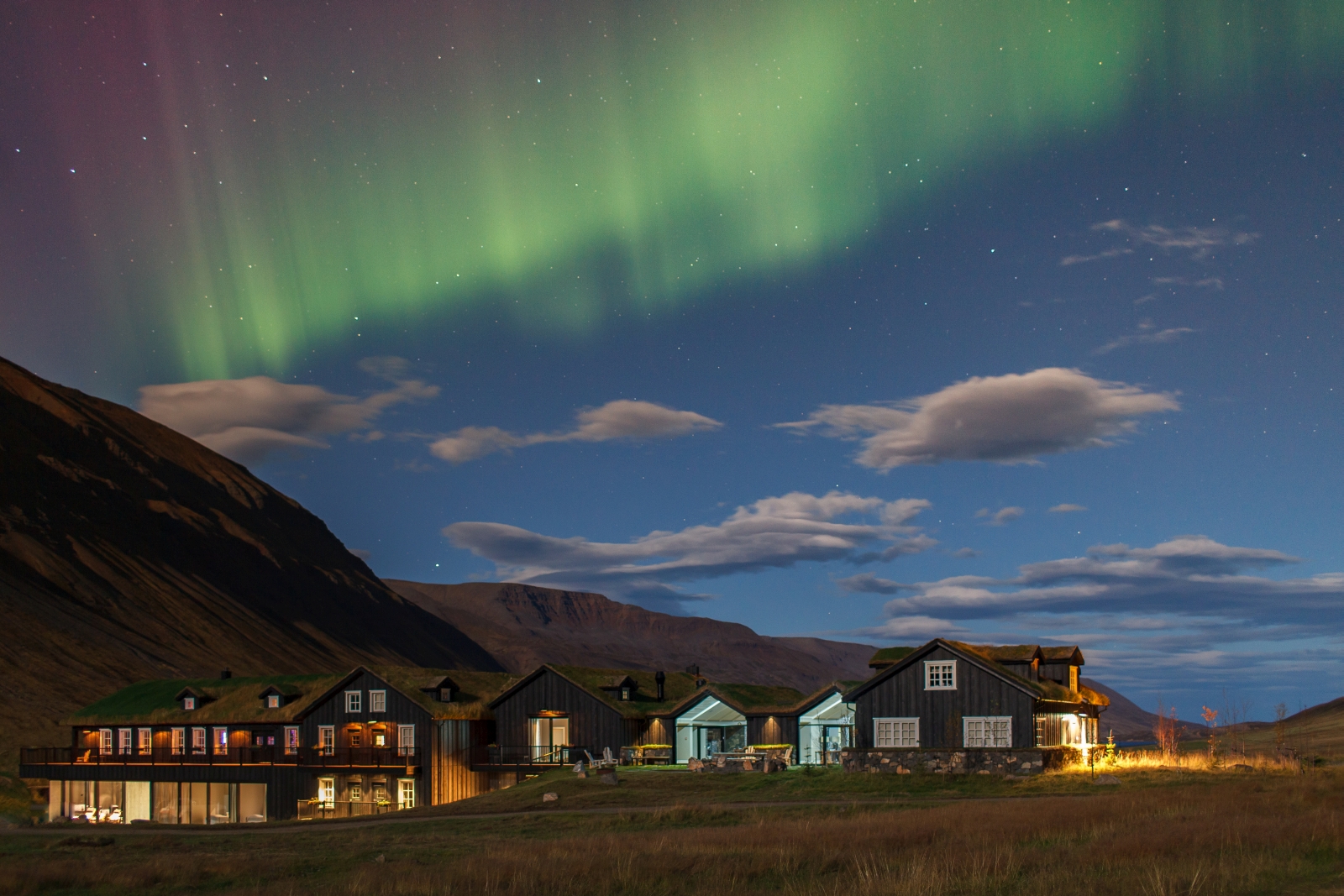 About as far removed from any sources of artificial light as you can get, the remote Fljot Valley on the mountainous Troll Peninsula in northern Iceland is one of the best places in the country to catch a glimpse of the Northern Lights. Convenient then that it’s also home to one of the most isolated yet luxurious hotels in Europe – Deplar Farm. Previously an 18th century sheep farm, the property features just 13 rooms – all named after Norse gods – as well as a geothermally heated indoor/outdoor pool, a sublime spa and an acclaimed restaurant serving fish caught in the local rivers and lamb raised on the sides of the mountains outside. When not watching the aurora, Deplar Farm is perfect for heli-skiing, and with two helipads on the property, you’ll have instant access to rolling descents and steep couloirs that run all the way down to the ocean. And should conditions make flying impossible, there’s always cross-country or resort skiing, not to mention snowmobiling, fat-biking and snowshoeing. 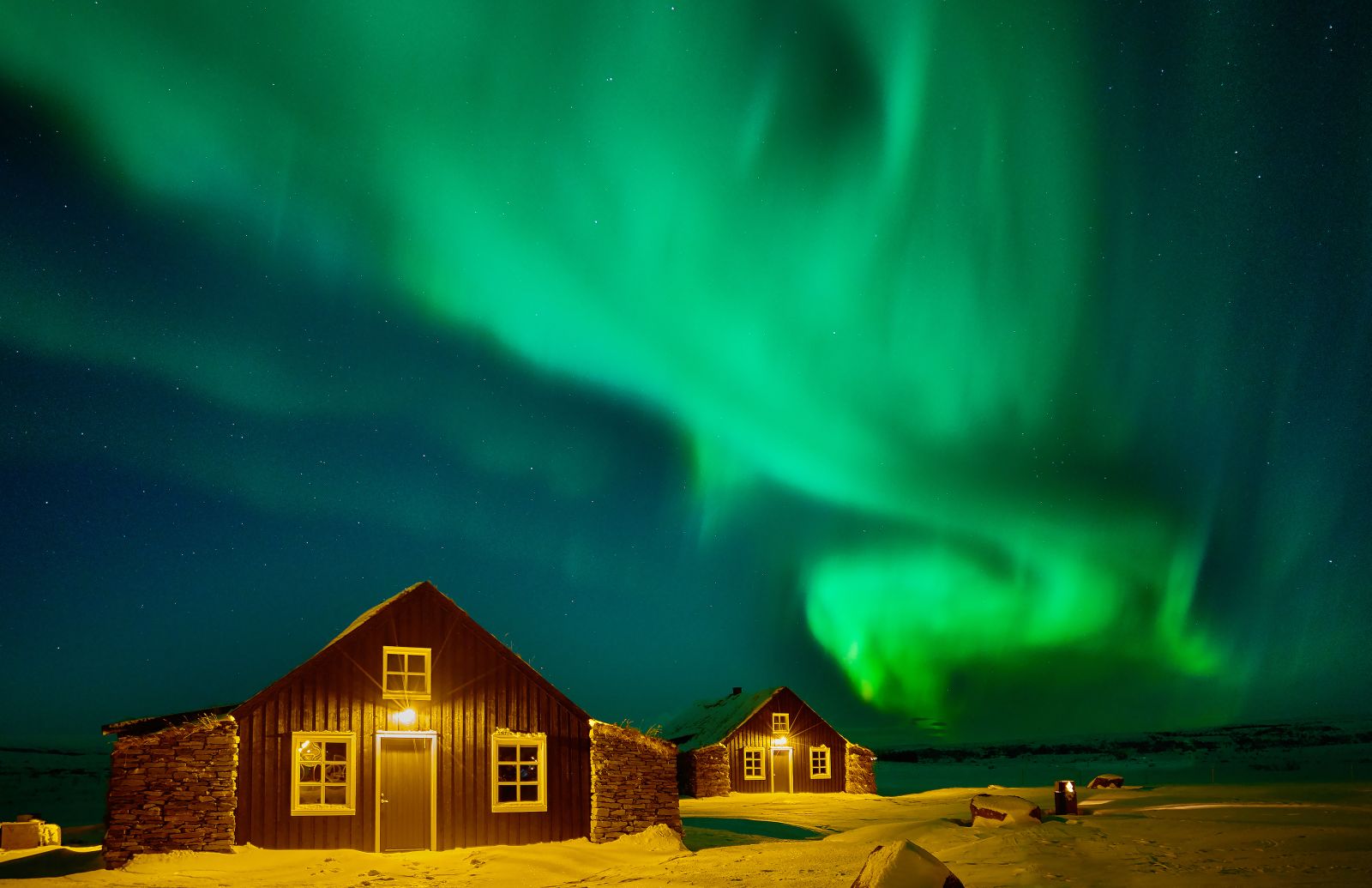 Torfhus Retreat in southern Iceland is isolated enough to offer wonderful Northern Lights viewing – made all the more vivid by the lack of light pollution – while remaining in reach of all the main attractions along Iceland’s Golden Circle, including the 105-foot-high Gullfoss Waterfall and the spurting geysers at Geysir. Torfhus Retreat has 25 turf-covered chalets with natural geothermally heated, basalt stone hot pools. They’re excellent bases from which to watch the sunset, or to ponder the majesty of the ethereal Northern Lights.

Tromsø is Norway’s largest city inside the Arctic Circle and provides a convenient gateway to the country’s northern reaches. The Northern Lights are often visible from the city’s bars and restaurants, it’s a wonderful option if you’re short on time. If time allows, however, we recommend you use it merely as a springboard to more remote locations. Some options, like Lyngen Lodge, are just a few hours from Tromsø, while others require another flight north, towards the Finnish border and the rugged North Cape, mainland Europe’s most northerly point. 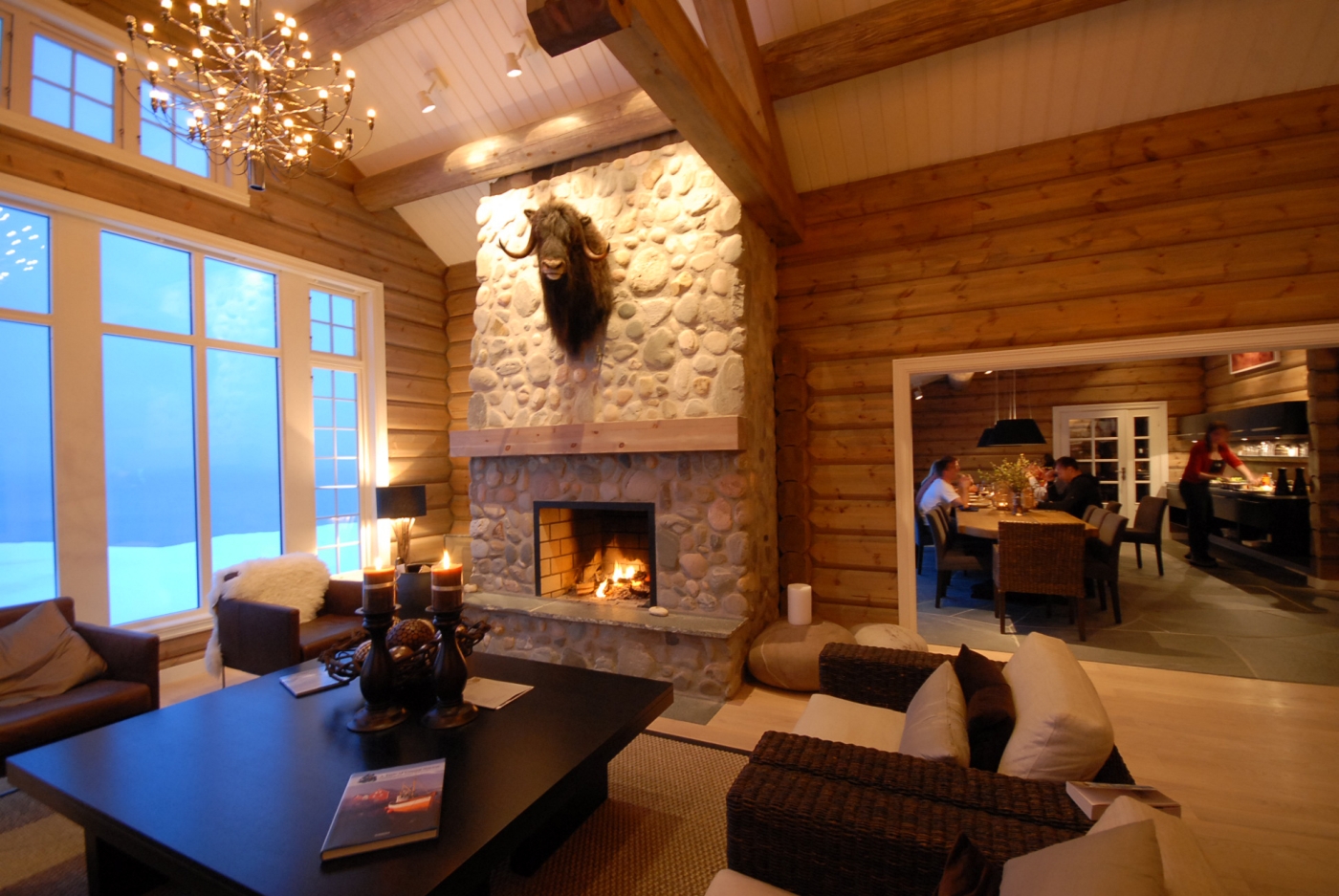 Set in a secluded woodland above the Lyngen Fjord, about two and half hours from Tromsø among some of the most dramatic coastal scenery ever seen, Lyngen Lodge offers stunning panoramas and a hugely impressive raft of winter activities. These range from classics like snowmobiling and dogsledding to ice fishing, cross-country skiing and whale-watching trips aboard the lodge’s own boat, the Spirit of Lyngen. Plus the staff give presentations on watching the Northern Lights, complete with tips on how best to photograph the displays. Despite the range of activities, it’s still an intimate affair, with a maximum of just 16 guests catered for at any one time, spread across eight bedrooms with either fjord or mountain views. Large social and dining areas, a library, sauna and outdoor Jacuzzi round out the facilities.

The Sami people believed the Northern Lights to be souls of the dead and a spectacle to be respected for fear of being carried off into the afterlife. Swedish Lapland claims some of the quirkiest places to stay to enjoy the lights, from romantic lodges to imaginative treehouses and a hotel made from ice. 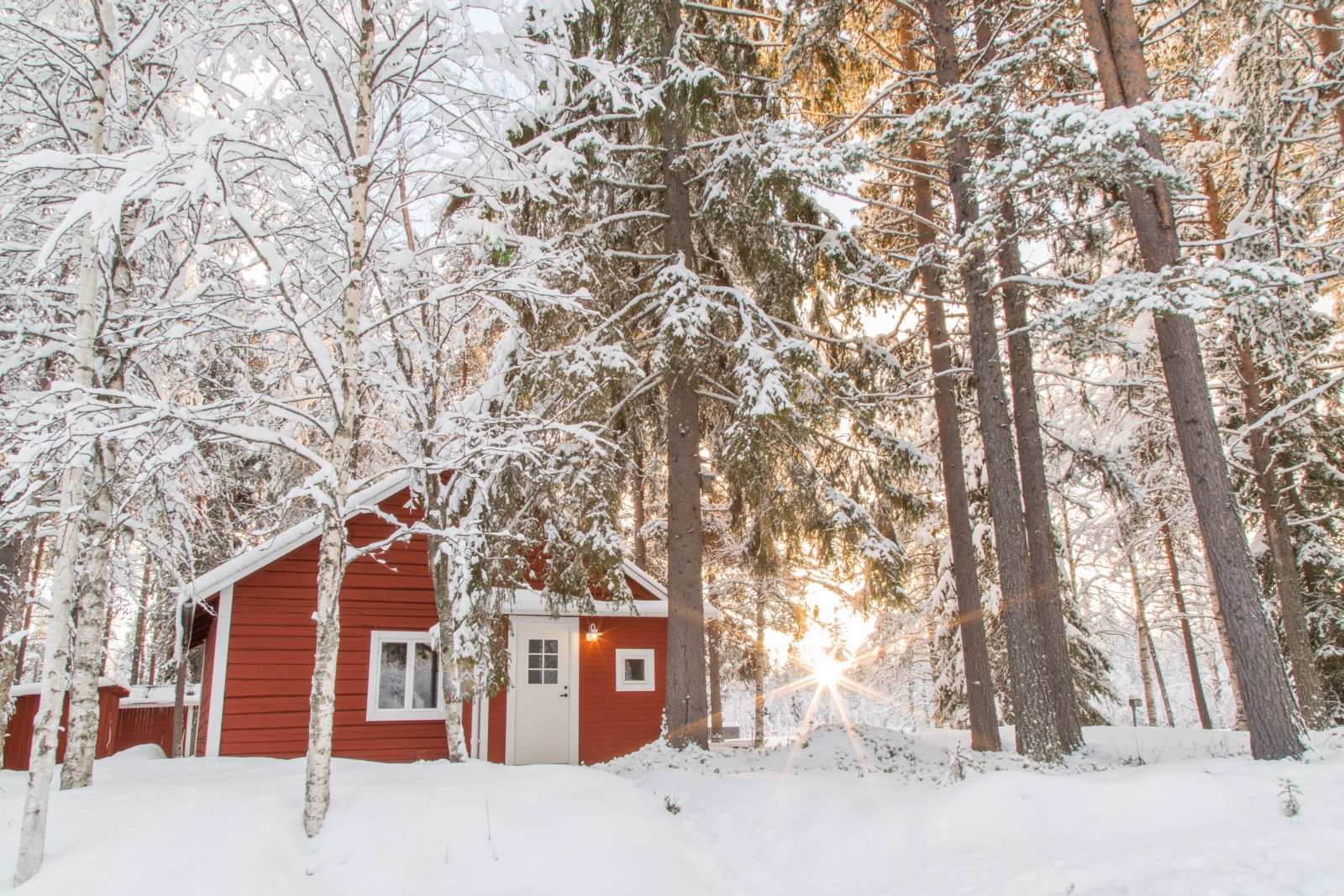 Once a cabin in the woods for up to 16 burly lumberjacks, Loggers Lodge is now a luxury retreat for two in the heart of Swedish Lapland. Owners Eric and Jorgen have done an amazing job in updating the traditional log cabin, using native timber, scattered reindeer and sheep skins, and a tremendous central fireplace. The overall effect is what the Danes to the south would no doubt call hygge – that feeling of warmth and cosiness that comes from simple pleasures.

When it comes to the Northern Lights, they’re best viewed here from the outdoor hot tub, or by taking a hike into the boreal forest that surrounds the cabin and staring up through the pines. A Northern Lights photography class is just one of the activities on offer at the lodge. Others include dogsledding, snowshoeing, snowmobile tours and reindeer encounters with the local Sami herdsmen. 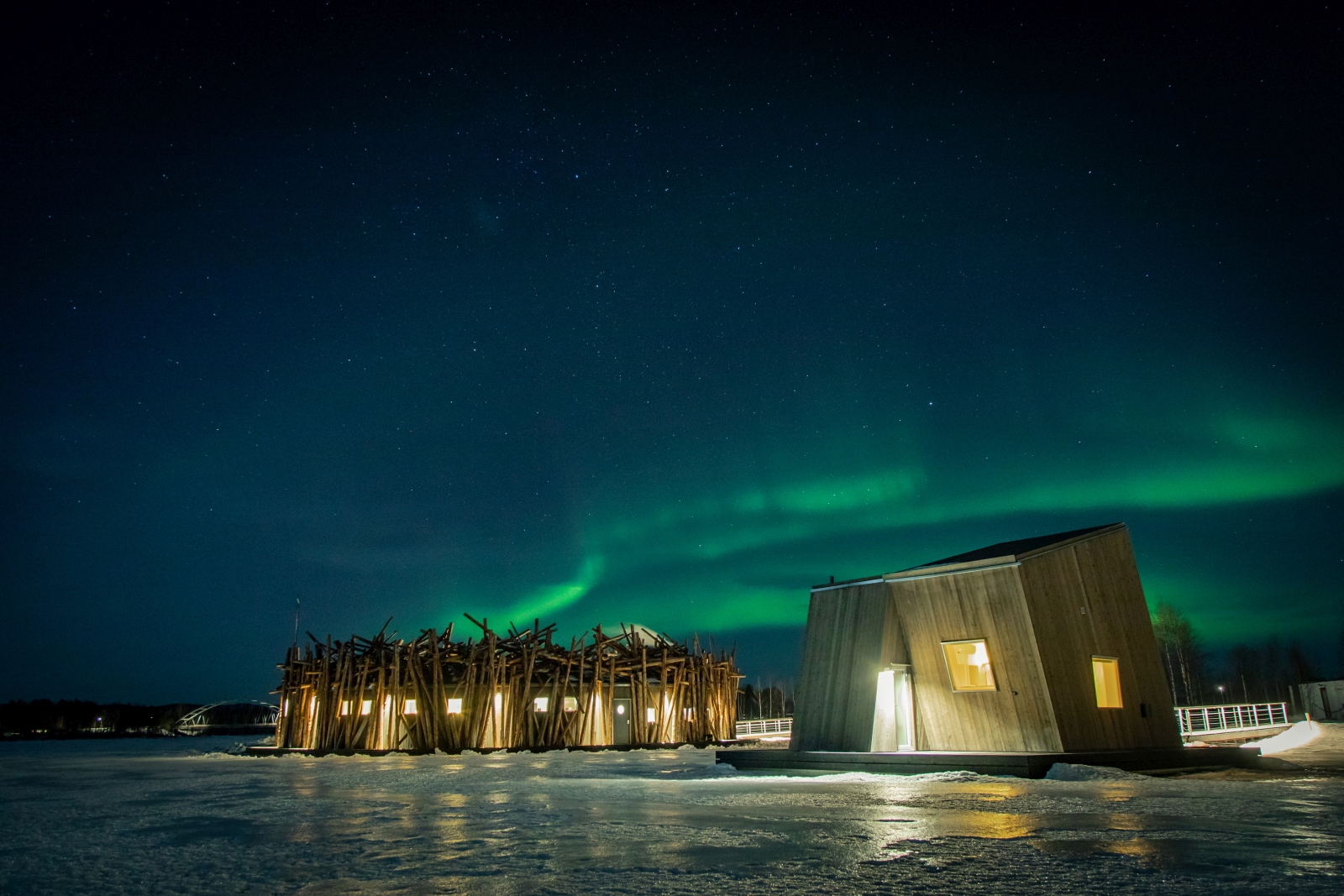 The subject of over 100 newspaper articles even before its first guests arrived, Arctic Bath is one of the most talked about hotels to have opened in years. This modernist spa retreat is dramatically set in the middle of the Lule River, serenely floating in summer and suspended in ice through the winter. The doughnut-shaped main structure was designed by Bertil Harström, the architect behind the Bird’s Nest and UFO rooms at the Treehotel, the arboreal design hotel that put the nearby village of Harads on the map. The tree trunks that clad the outside are said to represent one of the log jams that would occasionally crowd the river in the days when timber was floated down it, presumably by the lumberjacks that used to stay in Loggers Lodge. The hole in the doughnut’s centre is the spa’s central pool – the Arctic bath itself – where guests can plunge into the icy depths of the Lule River before retreating to a sauna or an outdoor hot tub, where attendants bring you drinks and frozen grapes to eat like olives. For views of the Northern Lights, the split-level land cabins are probably best. Elevated above the tree-lined shoreline, the fronts of these two-storey structures are made entirely of glass, offering uninterrupted views of any celestial goings-on.

Winter Holidays Minus the Skis

An Arctic Adventure to Svalbard

To plan your trip to see the Northern Lights or for more information about luxury holidays and hotels in Finland, Iceland, Norway or Sweden, speak to our European Travel Specialist, Clare Watkins on +44 (0) 1242 787 808.