Vietnam’s vast and variable climate offers riveting diversity from the otherworldly Ha Long Bay studded by limestone karsts to the buzzing cities of Hanoi and Ho Chi Minh. While the many varied landscapes will earn your attention, it’s the food, the country’s heart and soul which is the key to capturing your heart. 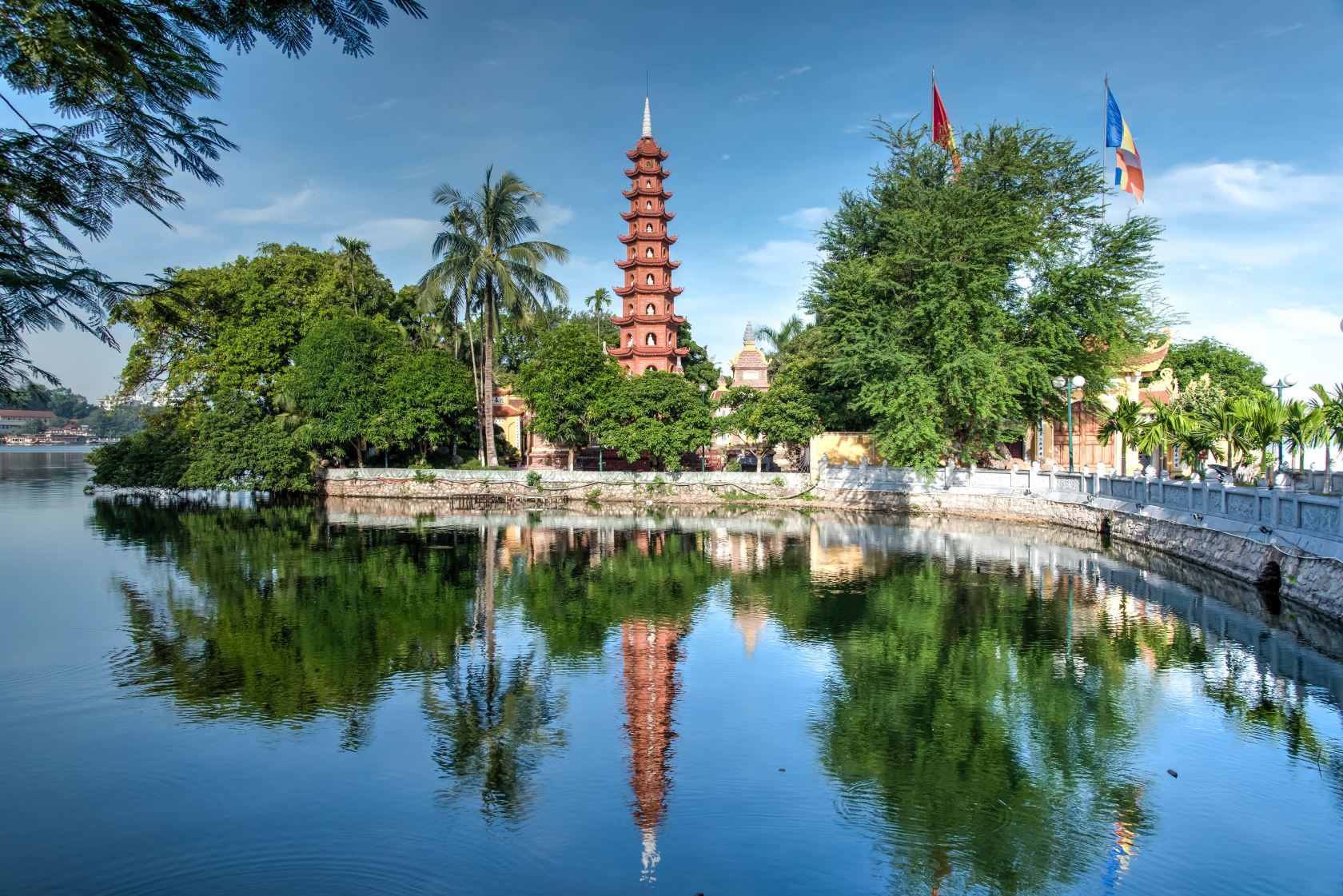 Sprawled out by the Red River, the alluring city of Hanoi has evolved through the ages retaining its status as a key Vietnamese city for over a thousand years. Often dubbed, ‘The Paris of the East,’ traces of French occupation are evident in the leafy boulevards and grand villas entangled in the romantic streets. Crumbling colonial buildings gradually give way to modern high rises among welcome refuges such as Hoan Kiem Lake, especially beautiful at sunrise when the first Tai Chi practitioners congregate around the glimmering water. Despite the vast damage of the Vietnam War, the city displays some resilient landmarks including many elegant temples and pagodas reflecting the Indo-Chinese culture still apparent today. Stylish international hotels bring you close to the sights such as Hao Lo Prison and the Ho Chi Minh Mausoleum, the resting place of Ho Chi Minh, North Vietnam’s leader from 1945 to 1969. Stay at The Sofitel Legend Metropole which is conveniently located close to the French Quarter and Hoan Kiem Lake. 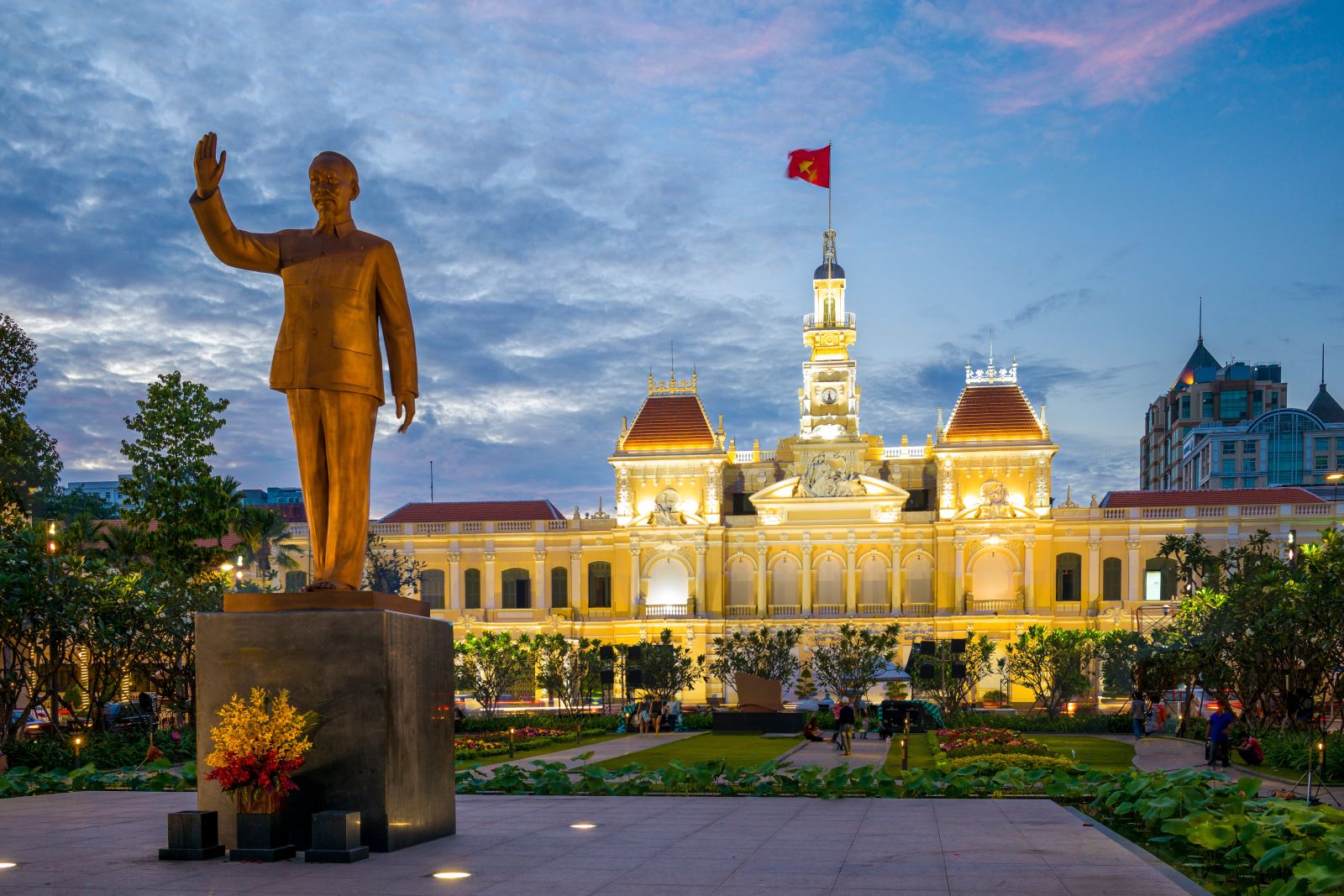 In Ho Chi Minh, formerly known as Saigon, a metropolis full of youthful energy is taking over from a complex past. The largest city in Vietnam straddling the Saigon River has dramatically changed since its time as an American military hub. Of its historical landmarks you can still see the sobering War Remnants Museum, Reunification Palace and Opera House as well as the belle-epoque villas and grand boulevards built during French rule. Today hip restaurants, art galleries and stylish hotels shape a revived culture. This is a fast paced, vibrant city with unsurpassed street food drawing people from all over the world. Whether they use the city as a launch pad to the Mekong Delta or to tick off the famous Cu Chi tunnels of the Vietnam War, one way or another all who are lured here tend to agree they wish they’d stayed longer. A stalwart of Vietnam's luxury hotel scene, the Park Hyatt enjoys a prime location in Ho Chi Minh City. 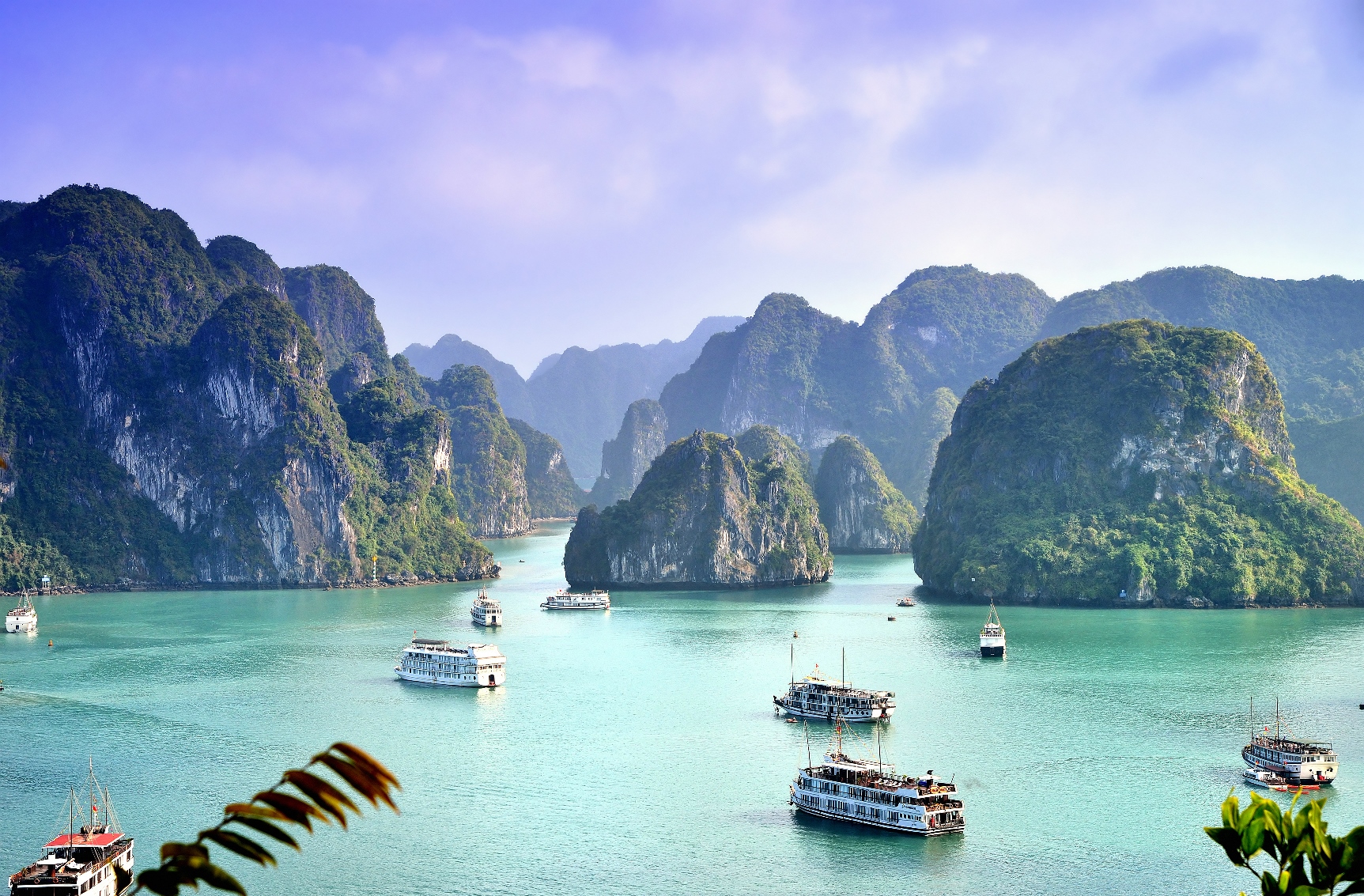 It takes a three-hour drive from Hanoi city or a 30-minute seaplane to reach these two natural wonderlands in the Gulf of Tonkin but it’s worth the travel time for the post-card worthy scenes. Halong Bay is easily recognisable from the oft-photographed jagged karst outcrops and jade-coloured water trawled by traditional junks. From a distance and indeed on closer inspection, floating villages, caves with teeth-like stalactites and around 2,000 forested islands seemingly float on the horizon surprising explorers of all kinds. Further afield, sailing around the quieter, smaller islands of Lan Ha Bay rewards visitors with rare moments of tranquillity and elevated activities such as cooking with expert chefs, Tai Chi on the deck and outdoor cinema experiences. Spend the days swimming, kayaking and gazing at the shapely stones sculpted into the horizon. A night onboard is mandatory even just for cocktail hour under the stars. 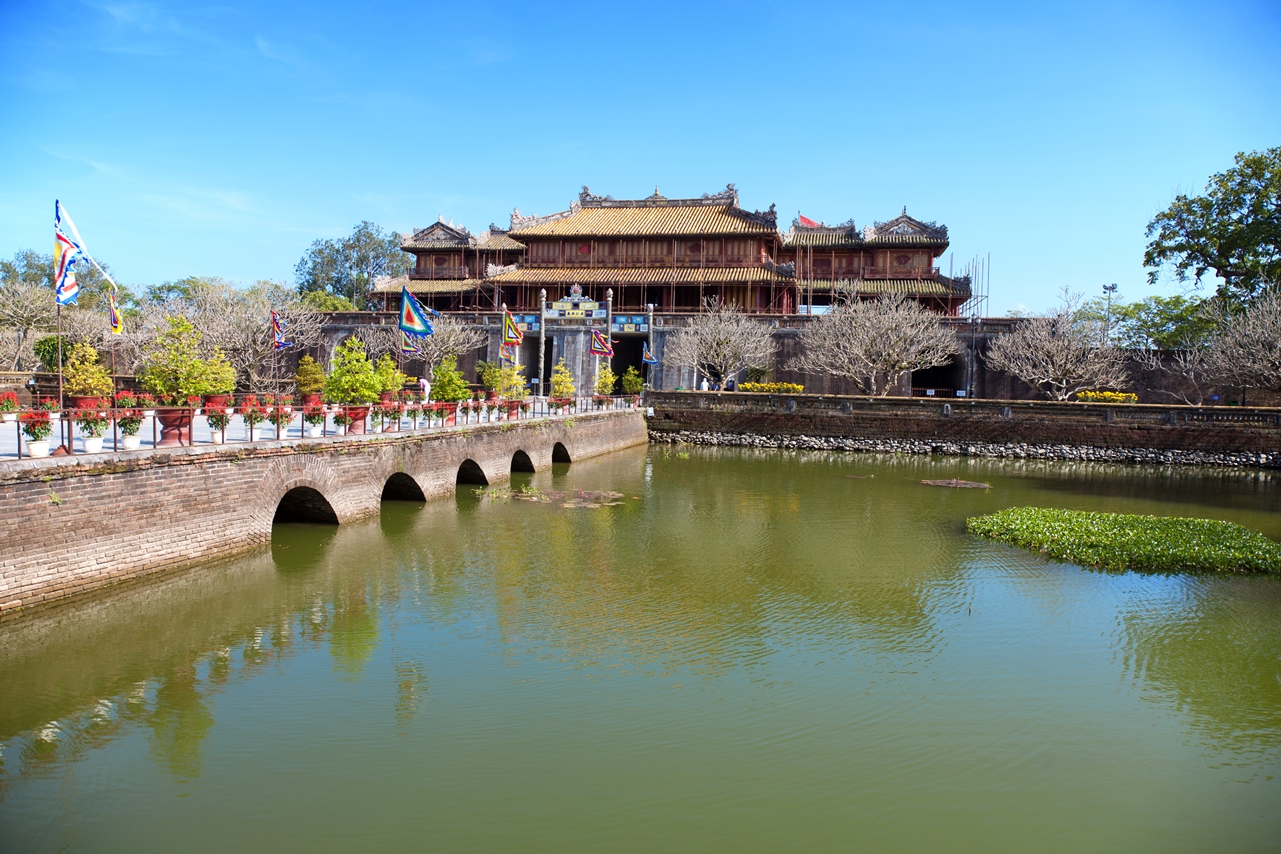 Easily reached from Hanoi city, on the banks of the Perfume River, Hue once served as the former capital of the Nguyen emperors whose dynasty ruled over Vietnam from the 16th to the mid-20th century. Most are drawn here by the famed, imposing Citadel protected by a 10-kilometre-long moat and thick stone wall behind which lies the once glorious Imperial City. Sadly, the mausoleums were heavily damaged by gunfire attacks during the 1968 Tet Offensive but today you can still see rich temples, courtyards, palaces and tombs constructed to carry out symbolic traditions. Strolling the lily ponds and frangipani with many of the monuments restored, it’s hard to imagine a time when it wasn’t always so serene. Don’t miss the galleries showcasing Vietnamese textiles and costumes and Thien Mu Pagoda for splendid views over the city. 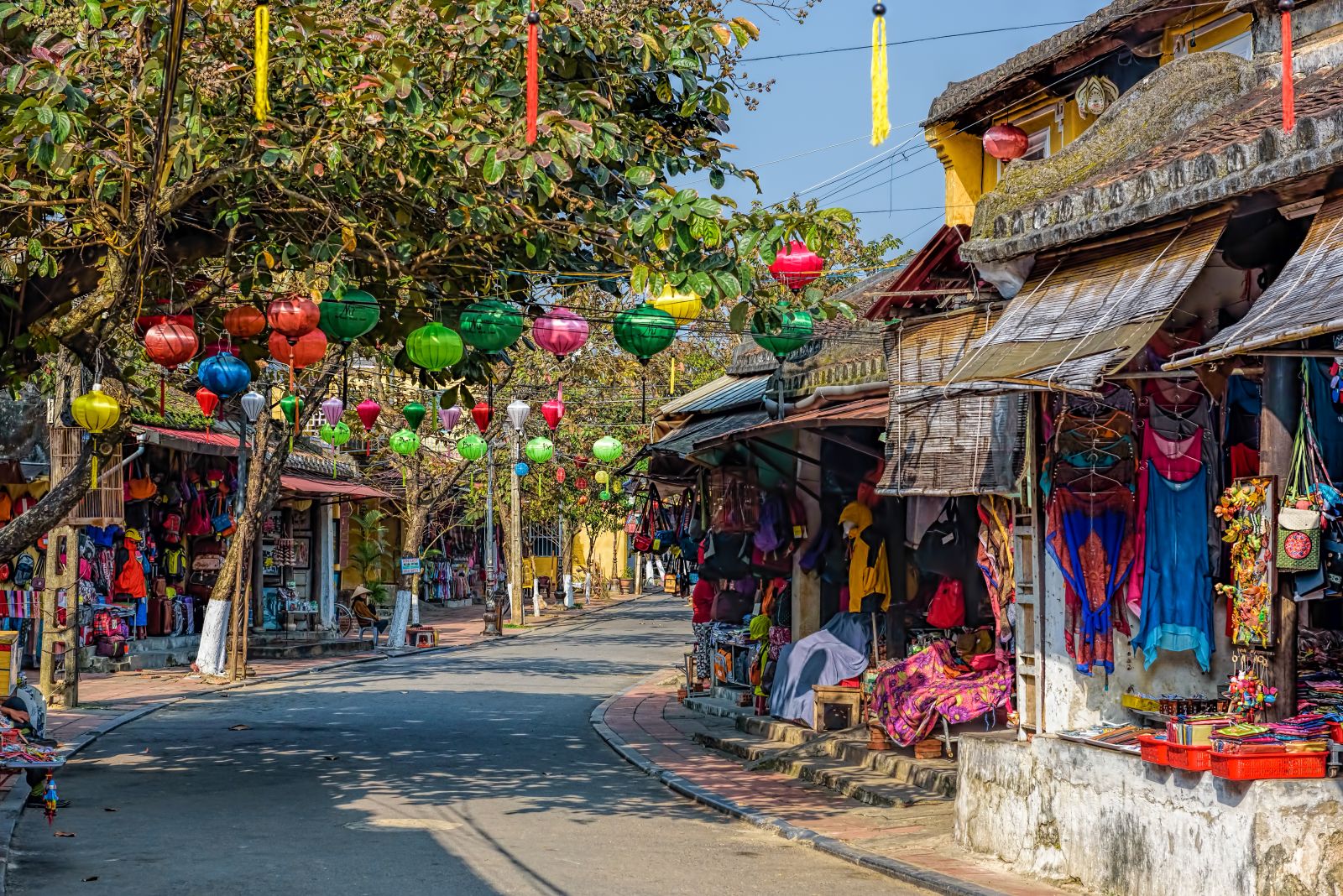 Perched on the banks of the Thu Bon River that feeds into the South China Sea, the ancient port town of Hoi An and its highly strollable streets encapsulate a bygone era. A mix of low-slung, Japanese merchant houses and grand French colonial mansions, sit peacefully, painted in gold-yellow hues and pleasantly drenched in sun. In the evening, lanterns strung from roof-to-roof light cafes, boutique hotels and charming restaurants serving dishes like banh mi, Vietnam’s delicious breakfast sandwich, of a quality you won’t find anywhere else. Make for the craft markets on the riverbanks or for something more sartorial, the amazingly affordable tailor shops can famously suit and boot you with outstanding craftmanship. To experience the best of both worlds, the soft sinking sands of Cua Dai beach are only a short drive away as are standout sea sweeping hotels such as the Four Seasons Resort The Nam Hai, for private beach access. 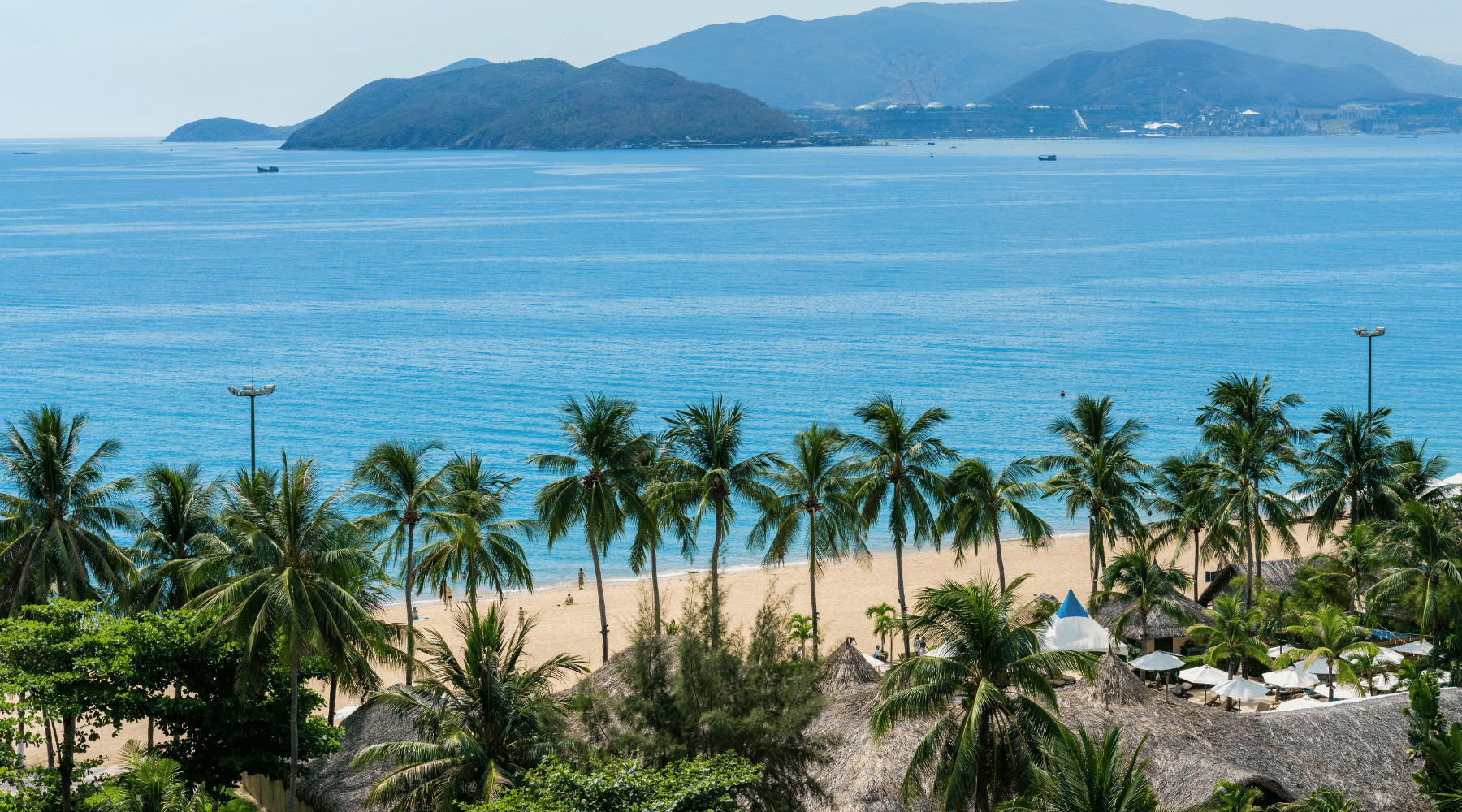 Often compared to the French Riviera, Nha Trang’s buzzing resort town revolves around a crescent white-sand beach backed by palms and shimmering jungle that trail along the dazzling coast. Cocooning mountains have help created its own special microclimate exempt from the rest of the country’s weather patterns, resulting in a warm, sun-soaked escape for most of the year. The eye never wonders from the emerald-coloured ocean, a stunning backdrop for swimming, water sports as well as scuba diving in the excellent marine reserve. Luxury resort, Six Senses Ninh Van Bay sits away from the town’s hustle and bustle and is accessible only by speedboat making for impenetrable privacy and a castaway effect. Days are spent slipping into the sea pushing off from the smooth boulders and kayaking adventures followed by private picnics and solitary walks only disturbed by the presence of langur monkeys. 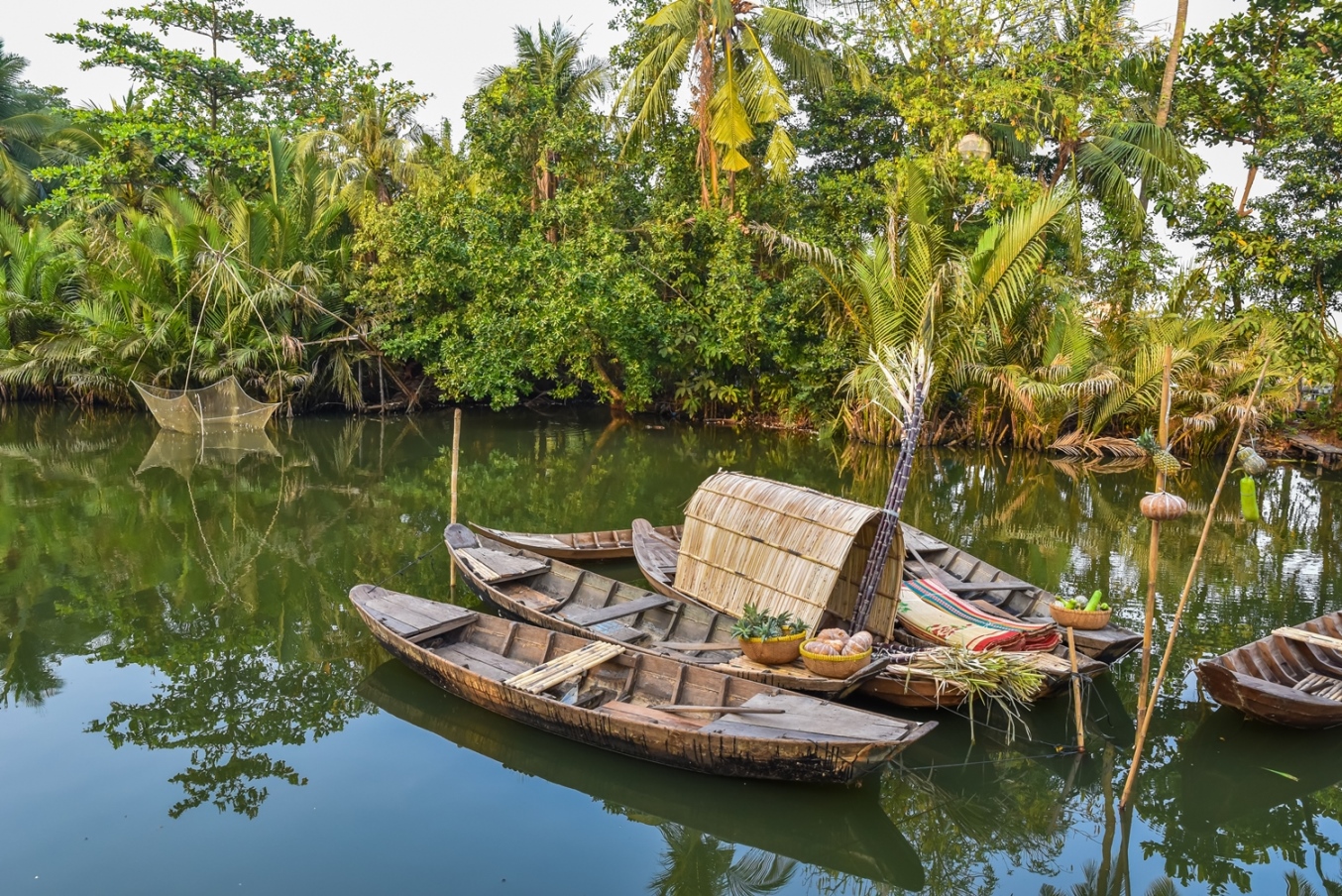 The Mekong Delta, the country’s vast lifeforce, winds for 2,700 miles long until it filters into the South China Sea. Its meandering water is a longstanding witness of Vietnam’s history; generations of Khmer, Vietnamese, Chinese and French communities have all settled along its shores. Rice paddies and wildlife-filled mangroves (explorable during high water levels) cover the landscape in intense green where little has changed among the watery veins. Here, life moves with the rhythm of the delta; merchants on sampans flood the floating markets, farmers wearing conical hats wade water buffalo through swamps and monkey bridges typically made of a single bamboo log, teeter over lily pad scattered canals. Time drips at a languid pace in contrast to its urbanised neighbour, Ho Chi Minh, a feeling best enjoyed aboard a luxury boat with a Michelin-starred chef and panoramic glass windows so you never miss a beat. 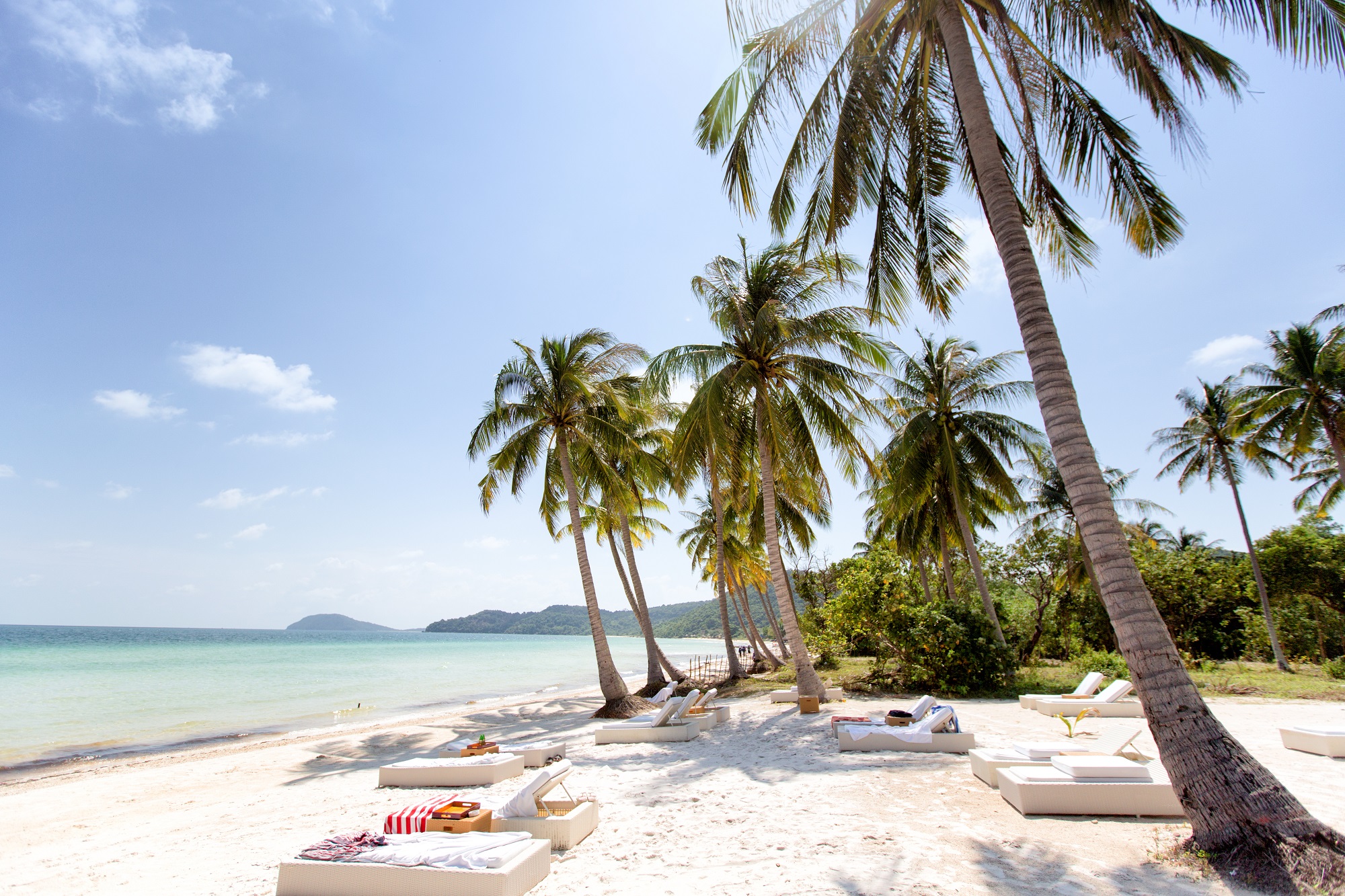 Phu Quoc, a paradise island off the Cambodian coast, is the perfect place to unwind after a whirlwind itinerary. A collection of handsome, pale beaches feel deliciously seductive while clusters of fishing villages retain an unpretentious charm. The chorus of fishermen as they haul in their catch signal the start of a new day. In the evening, you can watch lethargically as the silhouettes of drifting boats bob up and down on the horizon warmed by sunset’s amber hues. While it’s all too easy to bask in the constant sun and fill up on fist-sized prawns and peppery squid doused in locally sourced fish sauce, the island’s interiors of protected tropical forest beckon with wildlife such as hornbills and crab-eating macaque monkeys. Trek through the mangroves, wetlands and up to waterfalls for energetic interludes. Offshore, green turtles and dugongs often grace the sparkling crystalline waves.