ENQUIRE
Contact our travel specialists for practical advice on travelling to Mozambique, including best time to go, where to stay and what to pack.

The average temperature for Mozambique is a balmy 28ºC all year round. The climate varies slightly according to the regions of the country. The coast experiences a sub-tropical climate while the northern parts of the county are tropical. Generally, the hot rainy season is from December to March. The whole country broadly follows a southern African weather pattern, with the rains falling largely between December and March. Humidity can be uncomfortably high during this period.

As Mozambique lies in the rain shadow of Madagascar it has a relatively low annual rainfall. By around April or May the rains subside, the sun comes out and the humidity drops – better weather spreads gradually from the south to the north. June to October is the dry season, with often perfect tropical weather: clear skies, plenty of sun and almost no rain. This is the best time for most people to visit Mozambique. Although still tropical, June, July and August are Mozambique's coolest months; you'll need a light duvet at night, even though the temperature reaches over 30°C by day. During September and October it remains dry as daytime temperatures climb, though it cools down a lot at night. In November sometimes the rains start, although many days remain sunny and hot. The rains generally start earlier in the north of the country. 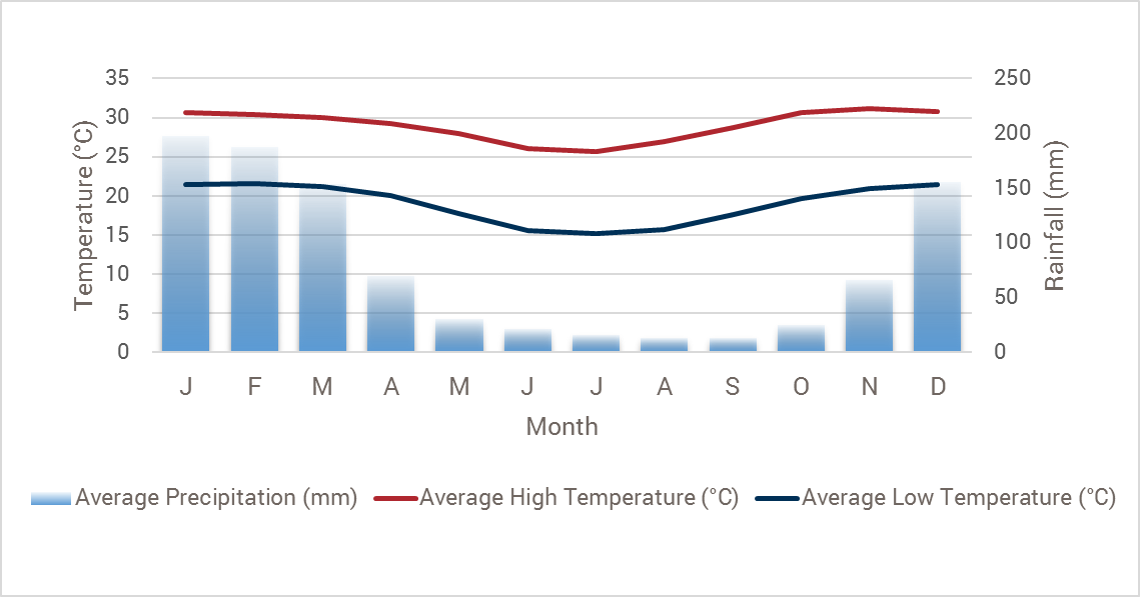 WHAT TO PACK FOR MOZAMBIQUE

People can make the mistake of taking along too much clothing when travelling to Mozambique. Pack comfortable, casual and semi-casual clothes. Please avoid wearing clothing resembling military/army uniform (i.e. army jackets, caps, and trousers), and dress appropriately when visiting towns, markets, and villages by being conservative in how much skin you bare. Remember to pack your long-sleeved shirts and trousers for the evenings to reduce the chances of mosquito bites.

Before travelling to Mozambique we recommend that you visit your doctor or a travel clinic to make sure that you have taken all the necessary health precautions. You can also contact the Medical Advisory Service for Travellers Abroad (MASTA) to obtain a ‘Health Brief’ specifically tailored to your trip. Another very good source of travel health information is Fit For Travel.

Mozambique carries a high malaria risk throughout the year in all areas. It is essential that you discuss this with your health professional and are advised on anti-malarial prophylactics. In our experience, Malarone is the most commonly prescribed anti-malarial drug, but we say that only in the spirit of helpfulness and not as a substitute for professional advice.

It is also very important to note that if you are entering Mozambique from a country where Yellow Fever is endemic, you will need to produce a Yellow Fever certificate upon arrival to its borders.

Ensure that you bring with you any prescription medications to last you the duration of your holiday, as well as a high-quality insect repellent and sun screen.

Tipping in Mozambique is not customary but always appreciated. In tourist areas leaving a gratuity for service is standard practice and is usually about 10% in restaurants, about $1 per bag for porters and $1-$2 per day for your hotel maid.

MOBILE / INTERNET CONNECTIVITY
Network coverage is good in developed areas of Mozambique but signals can be weak or non-existent elsewhere in the country. Mobile phone services are provided by MCel, Movitel and by Vodacom. Vouchers for pay as you go - ‘Giro’ for MCel - are available almost everywhere.

Some hotels in Mozambique offer complimentary WiFi access, as do many cafes and restaurants. Always check what charges may be applied before using their internet facilities just to err on the side of caution.