Boasting dramatic landscapes, Mediterranean climes and manmade architectural feats with history that dates back tens of thousands of years, Jordan is full of surprises. Explore a country where cities are carved out of rock, luxury desert camps offer ultimate stargazing and experience the rejuvenating powers of the Dead Sea, the lowest and saltiest water body on the planet. 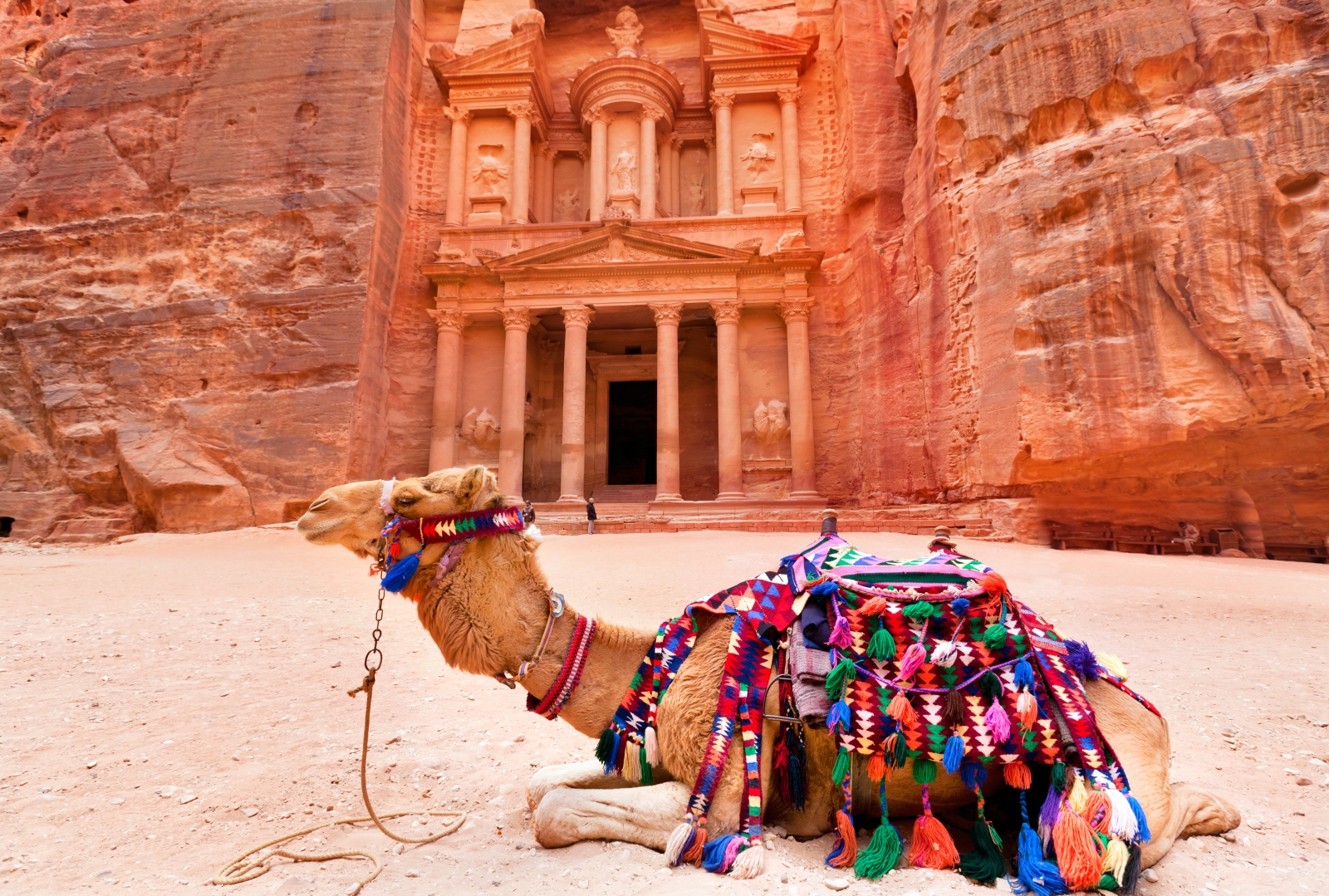 The lost city of Petra, Jordan’s star attraction has the ability to beguile even the most discerning traveller. Established by the wealthy Nabataean Arabs who carved out a flourishing capital from the surrounding red-rose rock, their exquisite masonry - tombs, temples and pillars - remain surprisingly intact despite being inhabited from as early as the 4th century BC and annexed by the invading Roman Empire. Access the ancient city via the steeply sided Siq, a mile-long trail that winds through the red rock until you come face-to-face with the giant sandstone Treasury, the country’s most recognisable icon. Admire the elaborate facade featured in Indian Jones and The Last Crusade before taking the 1,000 steps to the similarly impressive 3rd-century Monastery, worth the climb even just for the staggering views. Located close to the Petra's entrance, stay the Movenpick Resort Petra for early morning jaunts without the crowds. 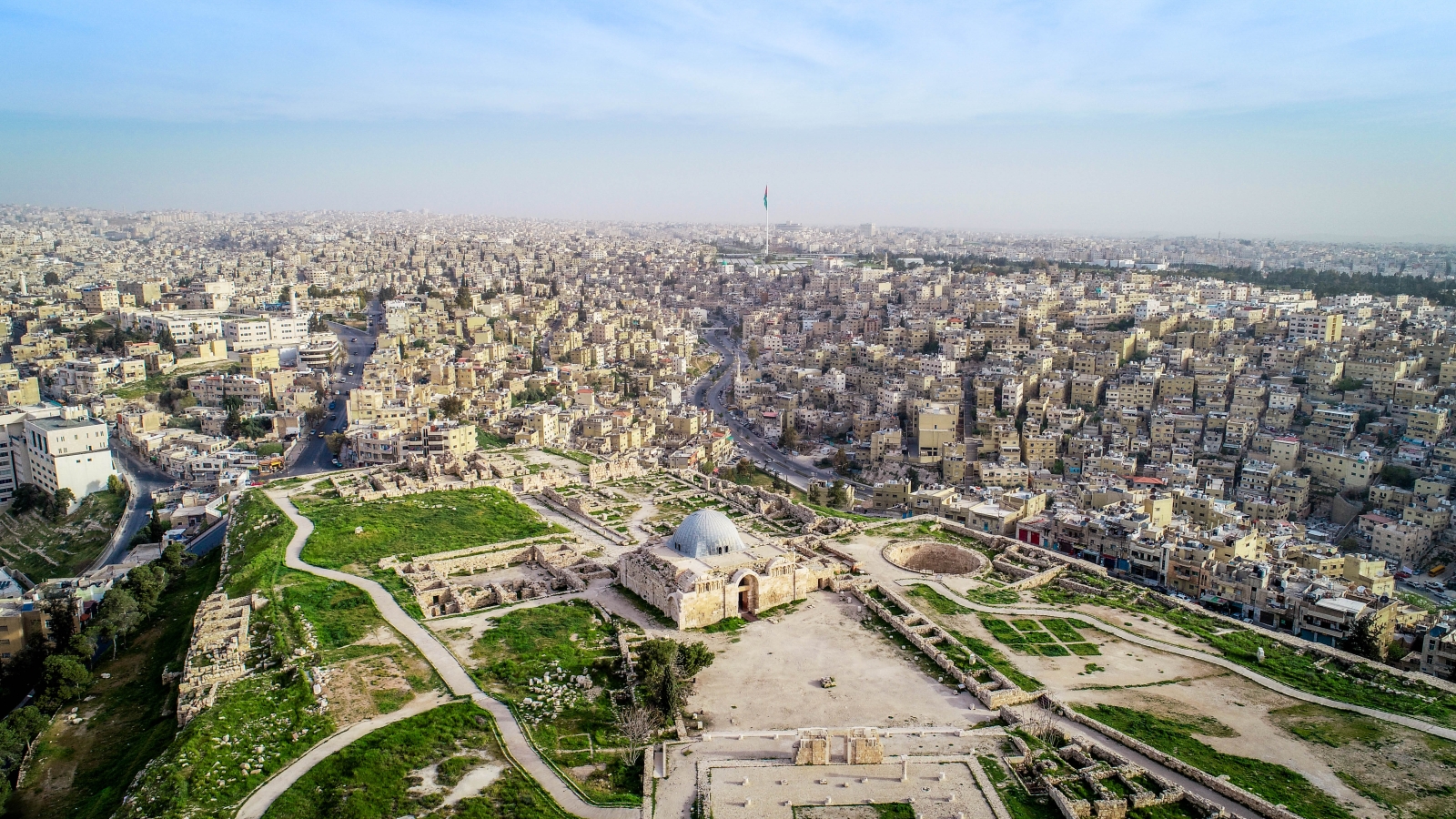 There’s no doubting Jordan’s capital is one of if not the most vibrant city in the Middle East with its trendy cafes, concept stores and contemporary art galleries. Among the many things to do in Amman, a street-food tour on the buzzing Rainbow Street is a must to sample the many Jordanian culinary treats while old-world souqs sell stacks of fresh produce from the early morning hours. Remnants of ancient history scatter the city including sites such as the 2nd-century Roman Amphitheatre that had the capacity to hold 6,0000 people as well as the pillars of the uncompleted Roman Temple of Hercules in the ruins of the Amman Citadel. Lap up the monuments and the city scenes from the rooftop pool at the Fairmont Amman, especially evocative during the evening calls to prayer while the pigeons fly overhead. 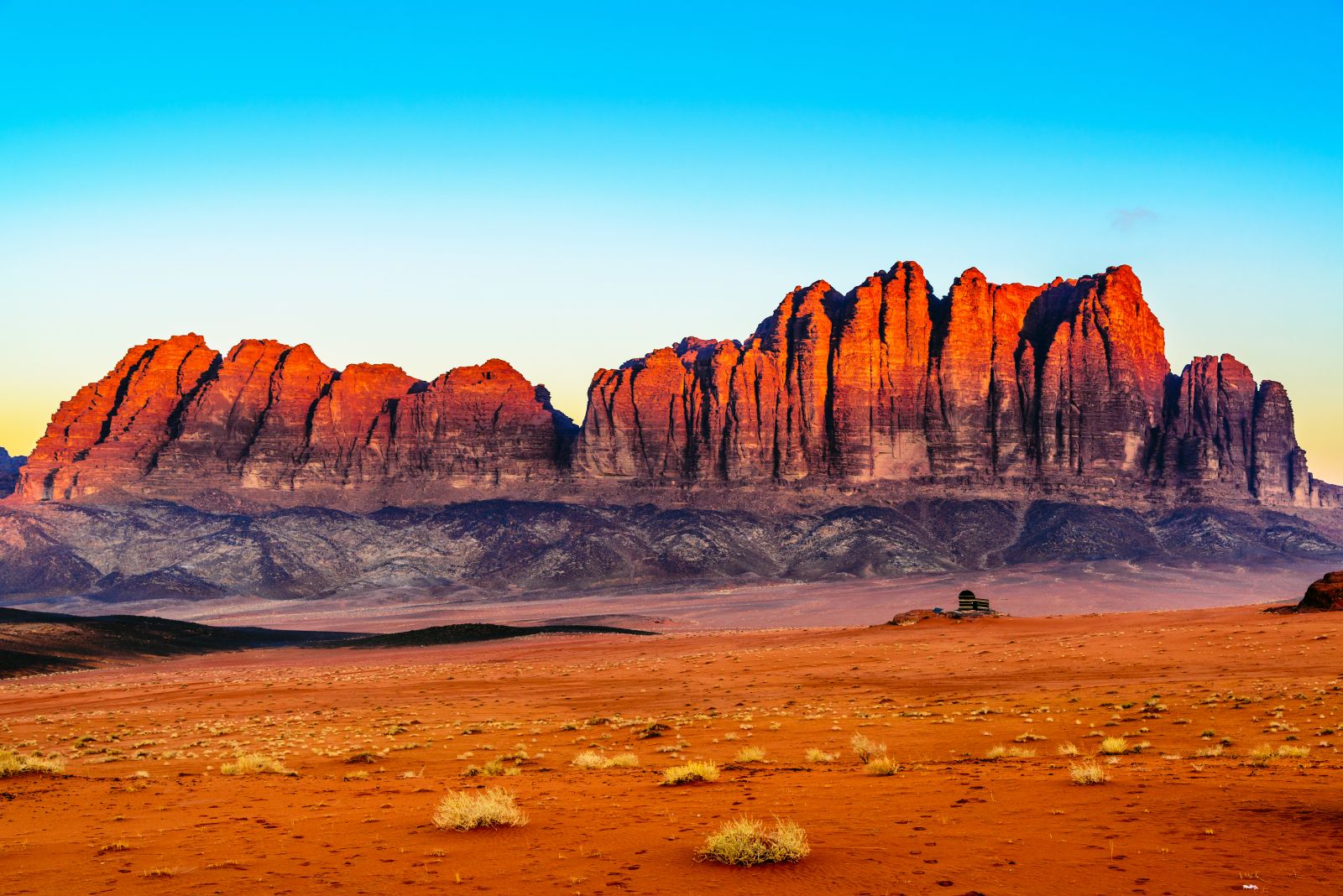 Engulfed by 720 square kilometres of wind-streaked desert, the Mars-like landscapes of the Wadi Rum valley harbour more than just relentless red sand and scenes out of Lawrence of Arabia. The curvaceous dunes and rocky arched outcrops are the longstanding witnesses of many human cultures from the Nabataeans who left exquisite carvings in the form of petroglyphs to the desert-inhabiting Bedouin communities recognisable from their koufeyah red and white headdresses. Little disturbs the gaping desert save for the camels transporting their human riders through the vast ripples, an unmissable activity. Hot air ballooning during the early morning hours is another highpoint. The best time for hiking is during the winter months from October to April when the temperatures are perfect for adventures such as staying in a Wadi Rum desert camp under star-filled Arabian skies. 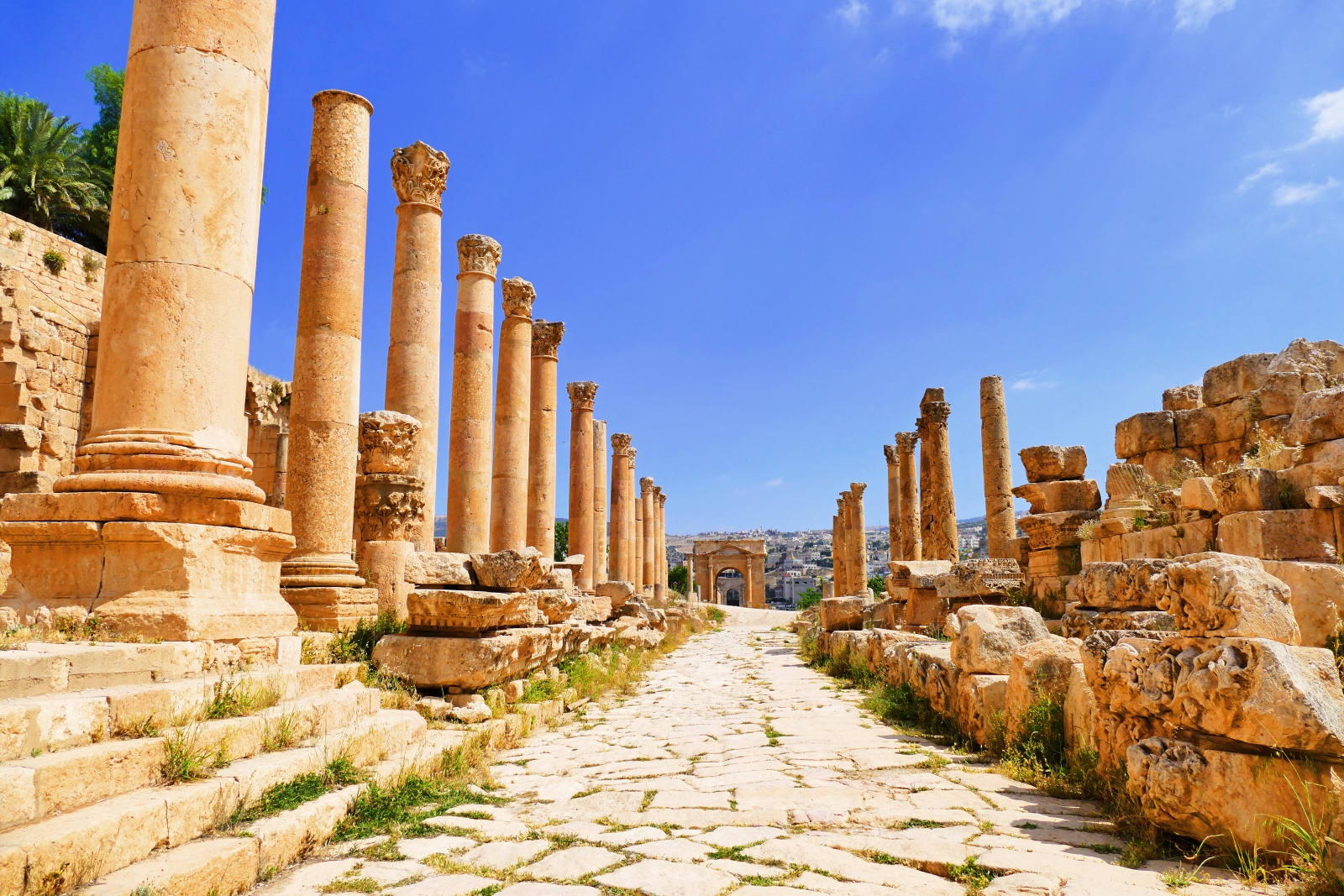 One of the best-preserved ruins in the world, Jerash once formed part of Decapolis – a league of the ten most important cities in the Roman Middle East. The ruins are now around 2,000 years old, with some earlier settlements inhabited since the Bronze age. An easy day trip from the city of Amman, a Jerash tour will take you to and around the dramatic Colonnaded Street, beautiful, collapsed temples and once-grand theatres among the many time-worn landmarks. Of the Jerash Roman ruins, remarkable sights include Hadrian’s Arch, a monumental entrance standing at 18 metres high and one of the largest known arches of the entire Roman Empire said to have been built to honour Roman Emperor Hadrian. Another astonishing structure is the Hippodrome, a magnificently restored arena that in its prime would have seated over 15,000 visitors, hosting chariot races and gruesome gladiator fights. 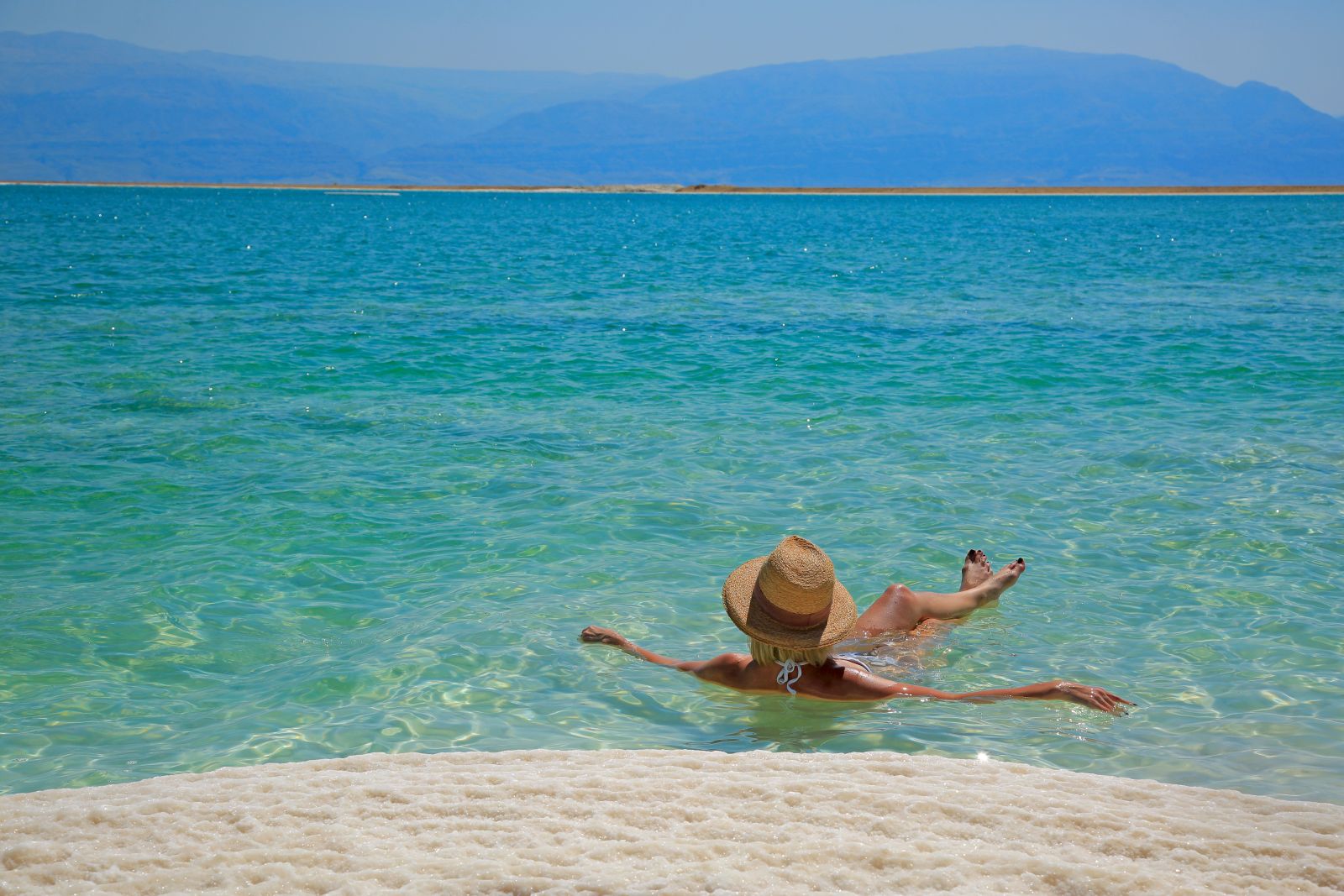 On the border of Jordan and Israel to the west, the Dead Sea lies at 420 metres below sea level, the lowest elevation on the planet. The contrasting turquoise water and red rock have become somewhat of a holy grail for wellness seekers looking to rejuvenate in Jordan’s version of a palm-studded riviera. The legend of the Jordan Dead Sea is supported by the fact it contains ten times more salt that normal ocean water allowing you to float sensationally with extreme buoyancy. The mineral-rich waters are said to harbour powerful healing properties that cure many ailments from allergies to arthritis. Stay at Kempinski Hotel Ishtar Dead Sea, a sea-fronting hotel with a private manmade beach allowing you to wade into the water whenever you feel the urge. Combine with a spa treatment such as Dead Sea salt scrubs or you could perform your own clay body mask coating your skin in the sulphurous mud before washing it off for the ultimate exfoliation. 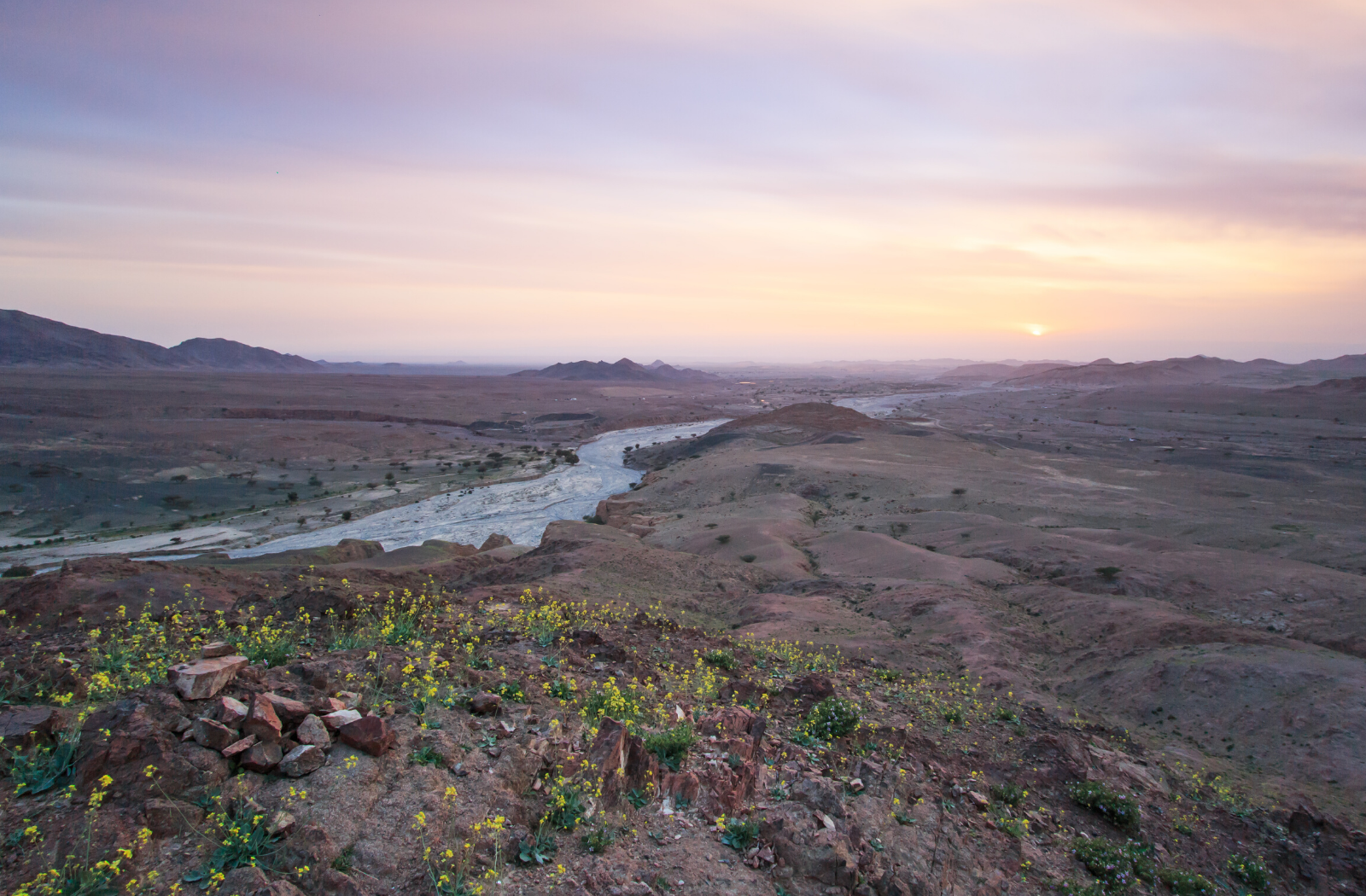 North of Petra, ancient mines litter the rugged landscape where 3,000 years ago Jordanians plundered the valleys for copper. Today the landscape is quiet, and nature has taken over forming a reserve and one of the country’s unsung highlights. You may not have heard about Dana Biosphere Reserve but it’s worthy of exploration in more ways than one. The country’s largest nature reserve covers 300 square kilometres of wild, deserted space; arid mountains, valleys, high plateaus and desert plains that cross four bio-geographical zones. The varied climate provides a habitat for similarly diverse wildlife such as the well-camouflaged sand cat, Syrian wolf and spiny tailed lizard as well as 190 bird species and 700 plant types. A hiking mecca, its most popular trek is a nine-mile trail called Wadi Dana starting from the high altitudes of Dana village and finishing at Feynan where you can marvel at bright constellations carpeting the clear sky.