Ecuador is possibly the most biodiverse place on the entire planet, a place where nature has been mercifully left to flourish. From a high-altitude capital city and its surrounding indigenous highlands to active volcanoes, cloud forests and magical Amazon rainforest, this natural wonderland is begging to be explored. Not to mention the Galapagos islands, a wildlife destination like no other. 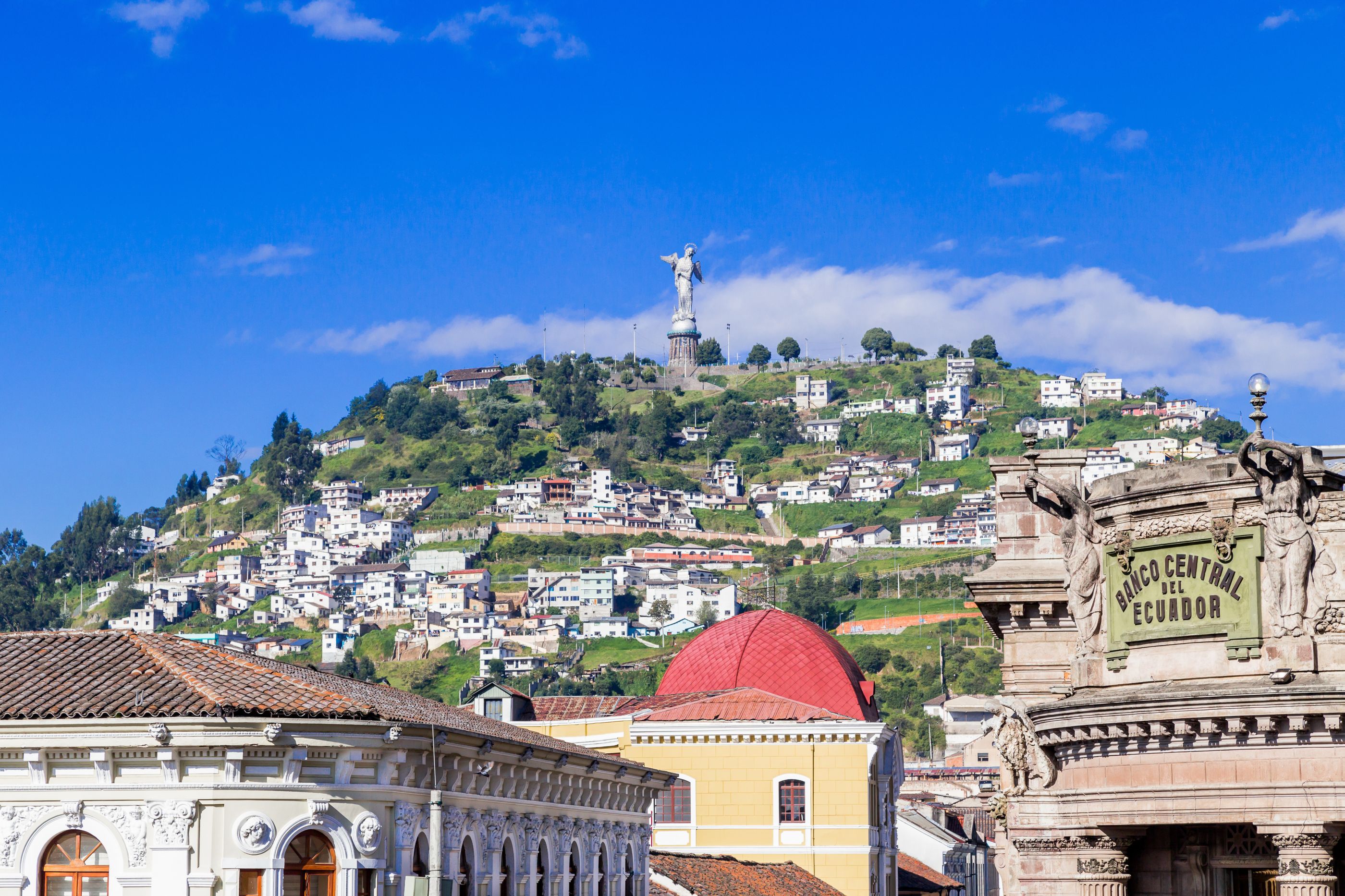 Quito, Ecuador’s highest capital in the world was also the first city to receive UNESCO World Heritage status. Known as the Florence of the Americas, its 16th-century buildings and independence-era architecture are set dramatically against the Andean mountains. The old city’s delicate cobbled streets and romantic plazas feel all the more atmospheric with pigeons flying overhead and women wearing bowler hats, part of their indigenous uniform. Visit this lofty capital for landmarks such as the Basilica del Voto Nacional, a Roman Catholic church of epic proportions, inspired by Notre Dame. While roaming the city, indulge in chocolate so divine, the Spanish called it the ‘food of the gods.’ The TeleferiQo cable car runs up the Pichincha Volcano and offers serene views over the city. Further out, treks around the Quilotoa crater’s 2km-wide caldera, keep serious hikers busy while you’ll most likely pass the Mitad del Mundo, a monument marking the equator’s location. Set in the heart of Quito's historic centre, Casa Gangotena is just a stone's throw from the galleries and craft shops in Calle de la Ronda.

OTAVALO AND THE HIGHLANDS 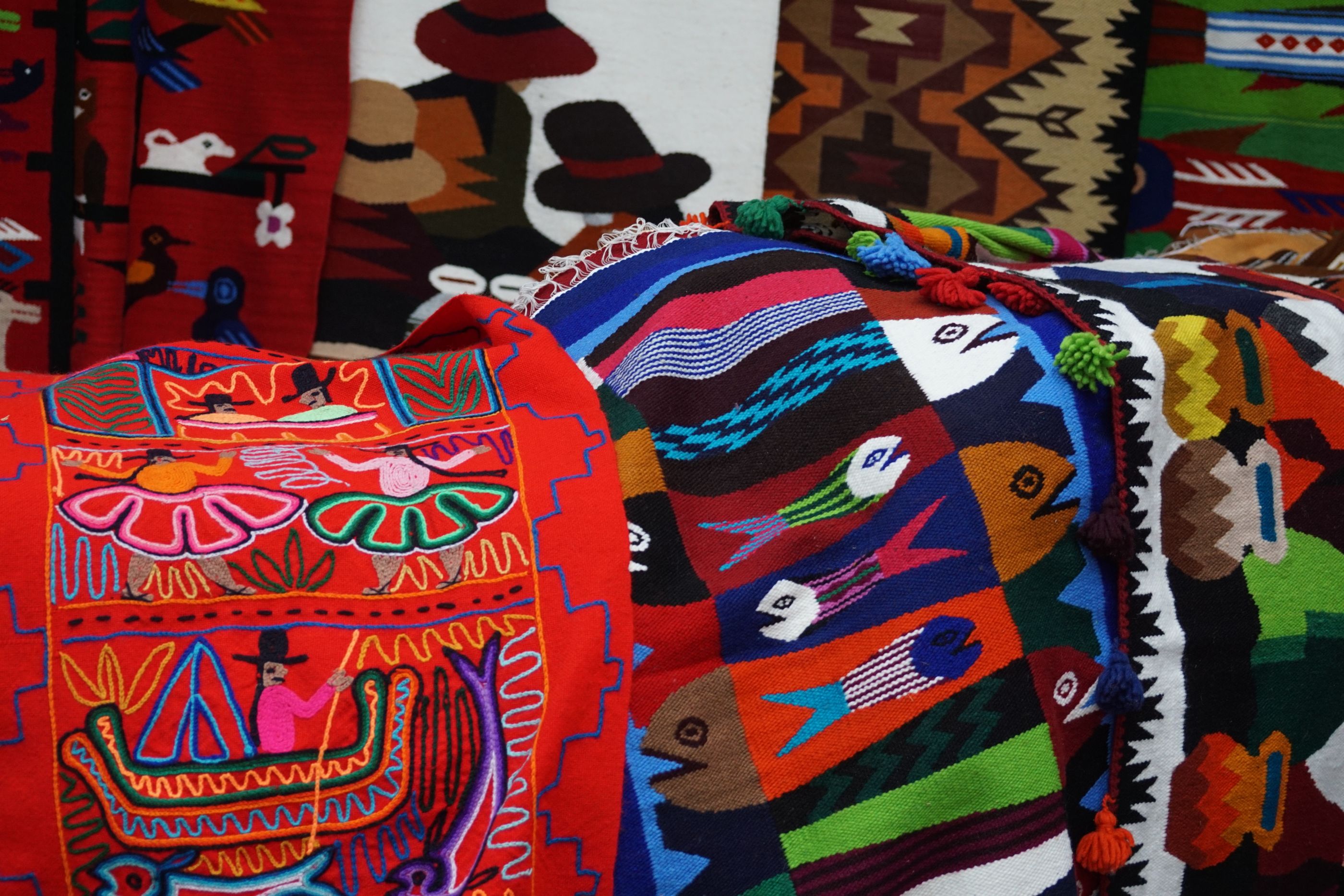 Out in the Ecuador highlands, in the rolling mountain scenery, preserved indigenous Quechan culture can be found throughout the countryside. No trip to Ecuador would be complete without visiting Otavalo, a village with a famed market dating back to pre-Inca times where jostling stores sell crafts, ceramics and colourful woven textiles. Otavalango Living Museum, once a Spanish hacienda, is dedicated to the surviving Quichwa peoples and their incredible recovery from indigenous exploitation. As a living museum, there are no exhibits as such but live recounts of the Quichwa revival after colonial rule, shamanistic rituals and weaving demonstrations among other fascinating activities. In the culture capital of Cuenca, you can walk around preserved colonial buildings and purchase crafts for which the city is renowned such as straw Panama hats. Hike to Peguche waterfall or the Cajas National Park, covered with alpine tundra, lagoons and paper tree forests as well as low-hanging cloud that sweep over the mountains. For unparalleled hospitality and authenticity stay at a traditional hacienda. 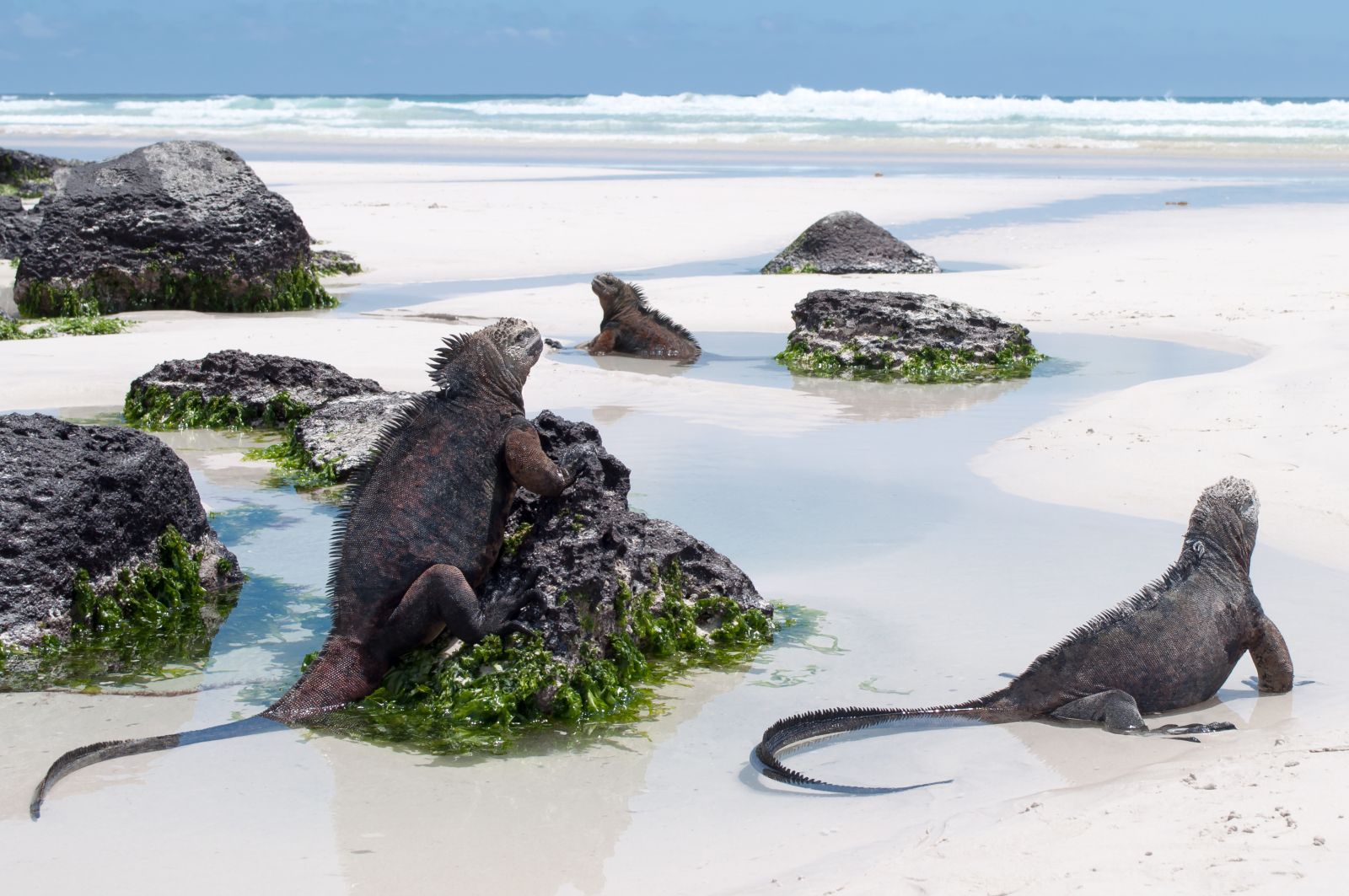 One of the most sought-after wildlife destinations in the world, the Galapagos archipelago is undoubtedly Ecuador’s pinnacle. Inspiring Charles Darwin’s Origin of Species, these volcanic islands sprawling across the equator are home to giant tortoises the size of cars and marine iguanas that can be remarkably spotted swimming under the water. Other rare species include the iconic blue-footed booby and bright-red Sally lightfoot crabs contrasted against the ash-black rock. The scarce human footprint shapes a type of wildlife utopia, its inhabitants left undisturbed to enjoy the nutrient-rich waters of the unique Humboldt current. With plenty of food to go around, Galapagos creatures appear absurdly tame. Sea lions offer close ups on the beach while penguins curiously investigate snorkellers or swim beside paddle boards. During particular seasons, whales and dolphins breach the water in high numbers while in autumn, near-perfect photographic light is generated by the soft fading glow of the September sun. Whilst cruising is the ultimate way to experience the Galapagos Islands, Pikaia Lodge, now provides a land-based luxury option in Santa Cruz.

AVENUE OF THE VOLCANOES 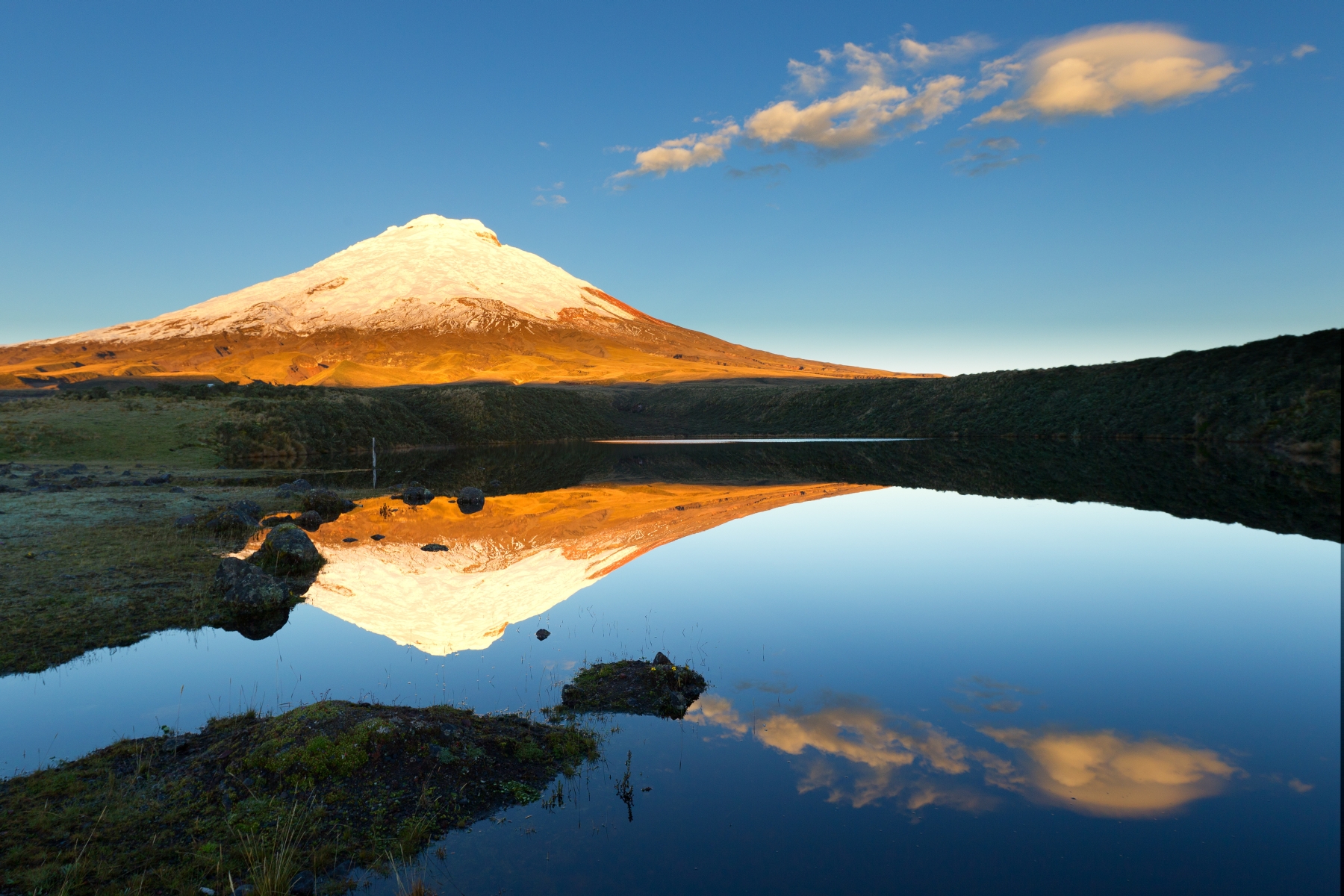 The Avenue of Volcanoes is aptly named after a volcano-studded corridor stretching south through Ecuador. One of them, Cotopaxi is the highest active volcano on earth located in a national park which you can explore in adventurous ways; on foot, by bicycle or on a horseback riding adventure. An interpretation centre offers a historical view of major eruptions as well as the varied flora and fauna that inhabit the fertile terrain. This is sublime trekking terrain with wildflower-dotted valleys, high-altitude lakes and Cotopaxi’s giddying snow-capped summit dominating the background. Serious hikers can climb to the base camp sitting at breathless heights reaching 4,800 metres above sea level. Climb the near-vertical track or zigzag up the volcanic rock for a scenic approach with more scope to take in the outstanding Andean panoramas. From this vantage point you can see earth’s pantones of red, gold hues unravelling below the brushing clouds. 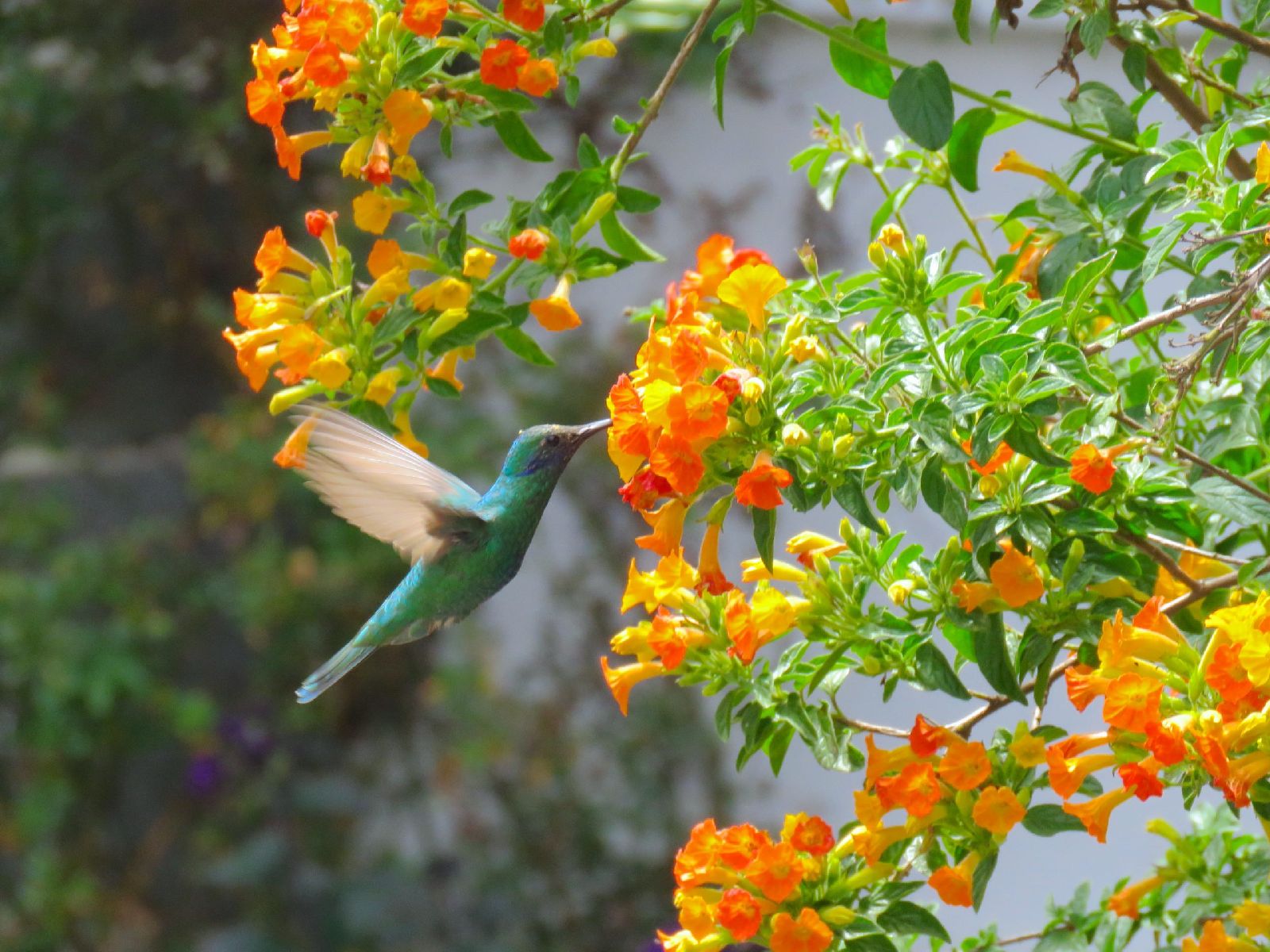 Ecuador’s cloud forests run almost the length of Ecuador where high altitudes and general inaccessibility result in a biodiverse Eden. Senses are amplified by the legions of trees, cacophonies of calling creatures and unique experiences that occur above the mist. Some parts have garnered revered status for rarer bird species, endemic amphibians and trees found nowhere else in the world as well as exciting ways in which to explore the nature. Specialist guides help wildlife enthusiasts to discover creatures such as the bizarre looking cock-of-the-rock and long-wattled umbrella birds as well as hummingbirds that thrive in manmade sanctuaries. See them from canopy towers camouflaged into the scenery for unrivalled views or on an exhilarating sky-gondola ride over the forest canopy 60 metres above the ground. Mashpi Lodge is set in an elevated position in Chocó Forest and offers a stylish and comfortable way to experience this intrepid region. While the cloud forest is generally wet, aim to visit during the drier months between June and September when the drizzle only adds to the atmosphere. 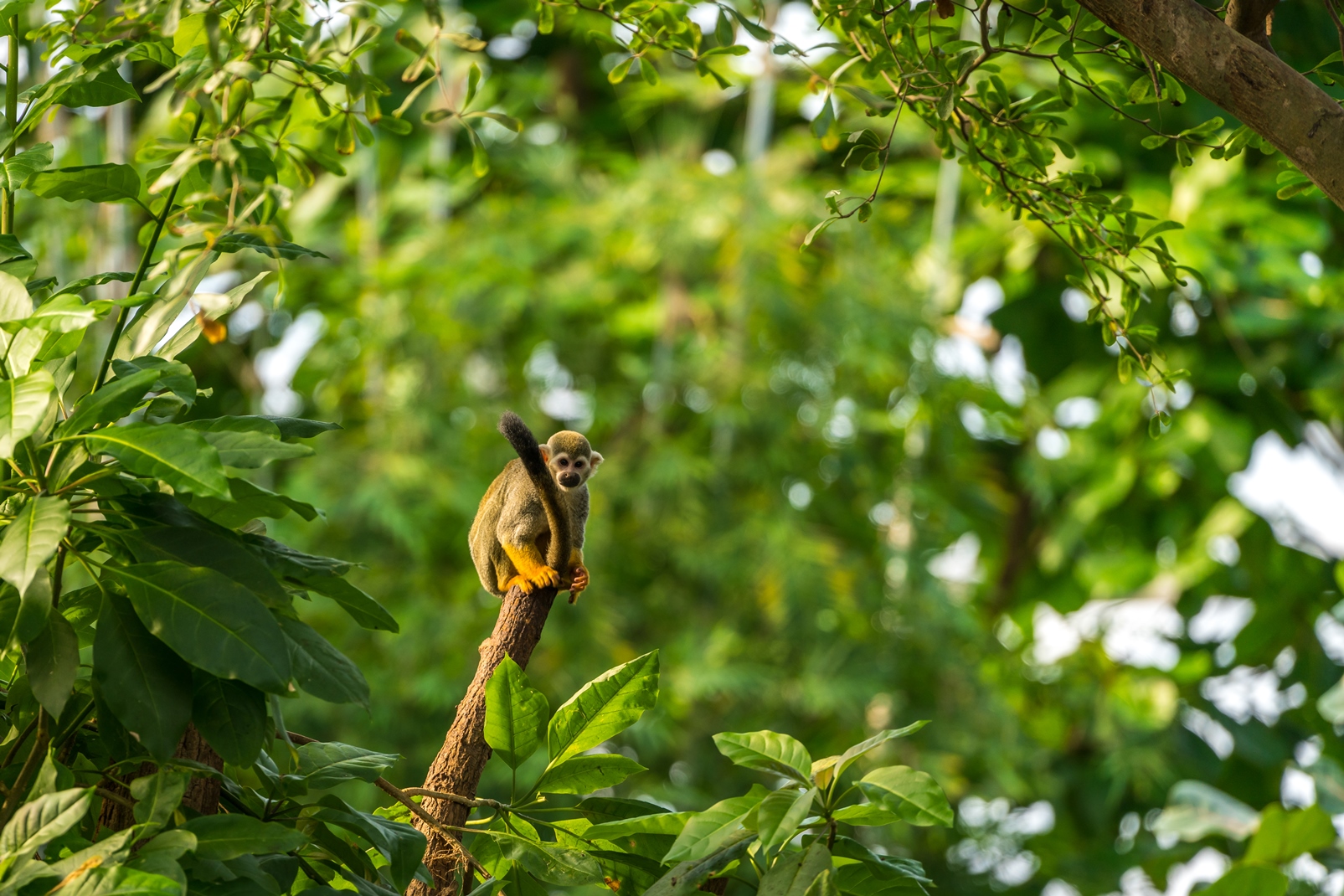 A cut above the rest, Ecuador’s Amazon Rainforest is one of the most biodiverse places on the planet. Compared to the giants of Brazil and Peru, Ecuador’s jungle feels lesser explored yet it is in fact more readily accessible (a short flight from Quito) making for some truly sensational explorative opportunities. Occupying about a third of Ecuador’s land mass - 40,000 square miles sitting east of the Andean highlands, there’s no shortage of things to do. Take a canoe ride on the Amazon River where scarlet macaws fly overhead, otters bask and kingfishers beat their wings around the water’s edges. Meet members of the indigenous Quichwa community who play a key role in preserving the rainforest. Yasuni National Park, a UNESCO World Biosphere, supports millions of mammal, plant, fish and bird species. Discover an ecological hotspot of gargantuan kapok trees, toucans and elusive ocelots. Stay at Napo Wildlife Centre Ecolodge, a collection of thatched cabins which are set in a lakefront location. Guests have access to outstanding guides and observation towers provide prime wildlife viewing.

Get in touch with our Latin America Travel Specialists to plan and book your luxury holiday to Ecuador and the Galapagos Islands on +44 (0) 1242 787 819.