With 18 World Heritage Sites, from Minoan palaces to sanctuaries to the gods, Greece fully merits its reputation as the cradle of Western civilisation. Just as appealing, though, is its benign climate, with 3,000 hours of sunshine a year to soak up on the mainland or the thousands of characterful islands that radiate from it into the limpid Aegean and Ionian Seas. 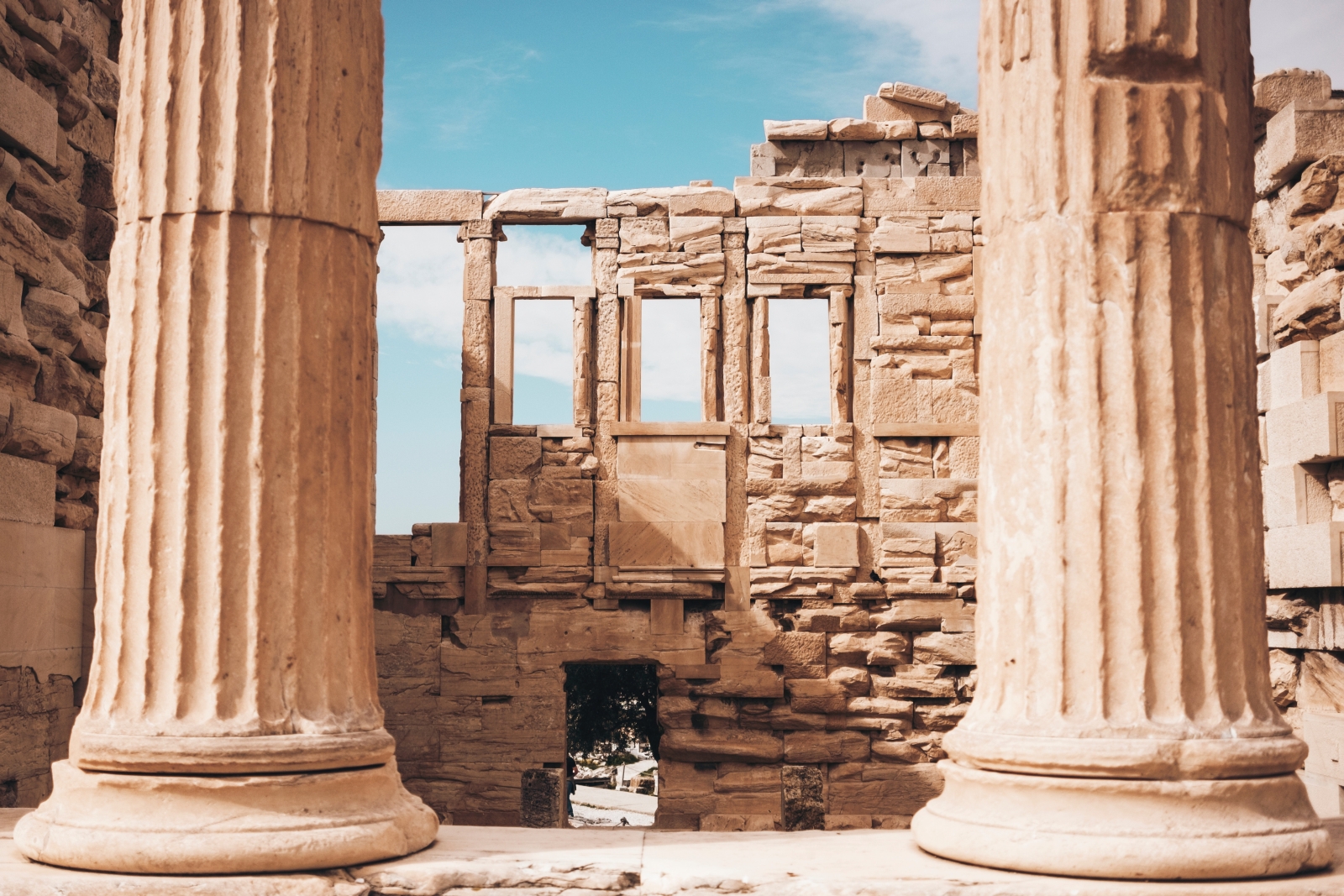 The ancient Parthenon that has dominated the skyline of central Athens for 2,500 years is so iconic it barely needs an introduction. However, it’s far from the only archaeological site in Europe’s oldest capital, or even on the rocky outcrop on which it stands, as you’ll discover at the superb modern Acropolis Museum. Streets laid out many centuries ago lead to an almost-intact Doric temple, the ruins of the original marketplace and an open-air Roman theatre that could seat 5,000. It’s not just about the distant past, though; in this ever-evolving city, there are spectacles such as the colourful Changing of the Guard at Syntagma Square, fascinating districts with distinctive personalities, and several cutting-edge art galleries. Escape the heat of summer at the summit of Mount Lycabettus, reached by cable car from the upmarket Kolonaki area, or on one of the private beaches of the glossy Four Seasons Astir Palace on the Athens Riviera, long a magnet for A-listers. 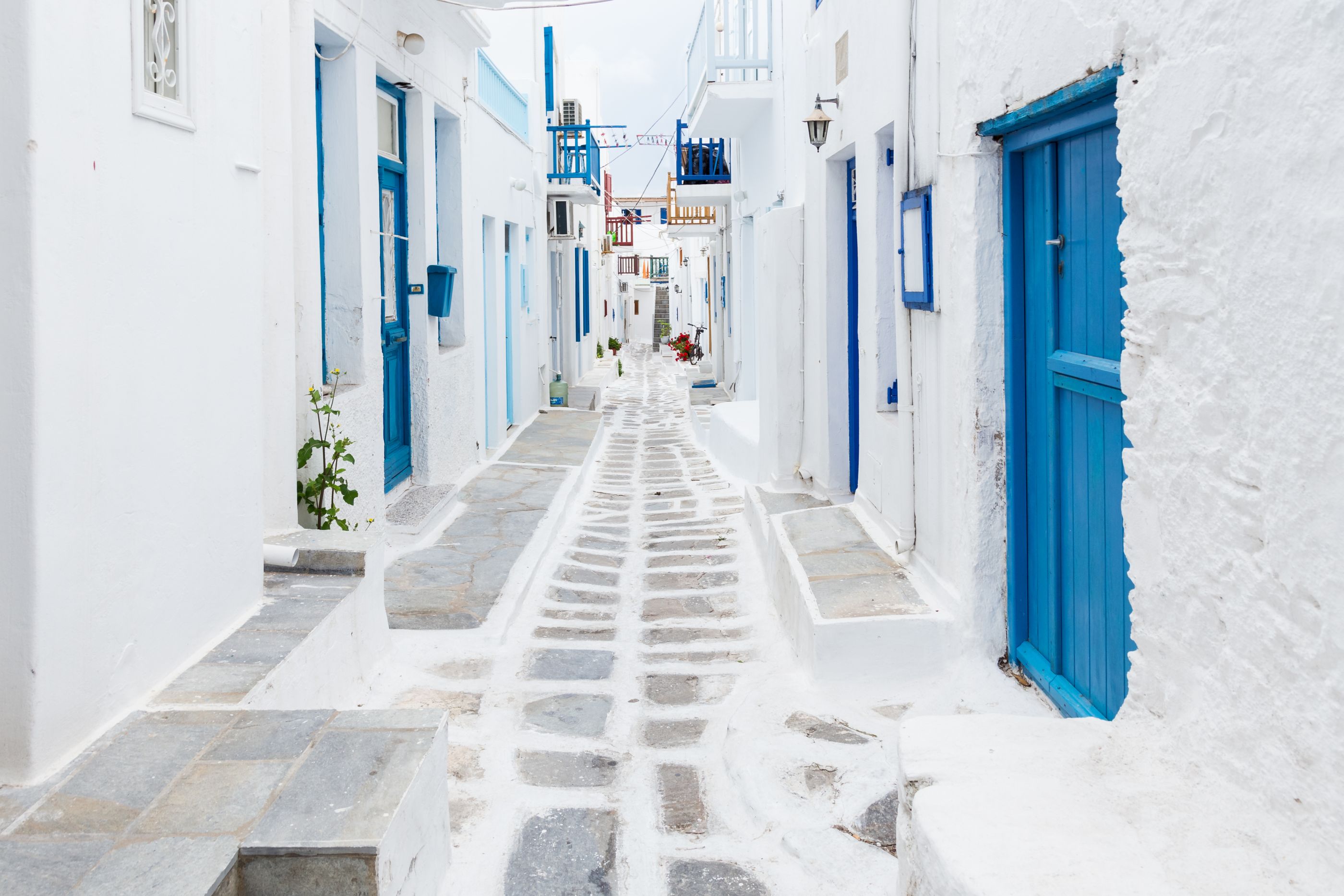 Mykonos is the Cycladic party island, as famous for its lively nightlife as for the characteristic Venetian windmills clustered above its harbour. The capital of this cosmopolitan destination, Mykonos Town, is jammed with high-end shops and designer boutiques, chic cocktail bars and cool cafés. You’ll find the most in-demand terrace tables around the attractive harbour or in the arty waterfront Little Venice neighbourhood, with its romantic arcaded houses. There’s just as much of a buzz at many of the island’s beaches, especially those in the south such as Elia, Psarou and Paraga with their legendary beach clubs; head north for quieter coves, many only accessible on foot or by 4x4. For a history fix, it’s a short boat ride to Delos, ‘the most sacred of all islands’ to the ancient Greeks, where Apollo and his sister Artemis were supposedly born. Now a World Heritage Site, the sanctuary is a treasure trove of classical art and architecture, from statues to temples. Book a stay at Kalesma for beautiful sunrise and sunset views from private suites, or opt for a private villa, Apollonia is set on the western shores of Mykonos overlooking the island of Delos. 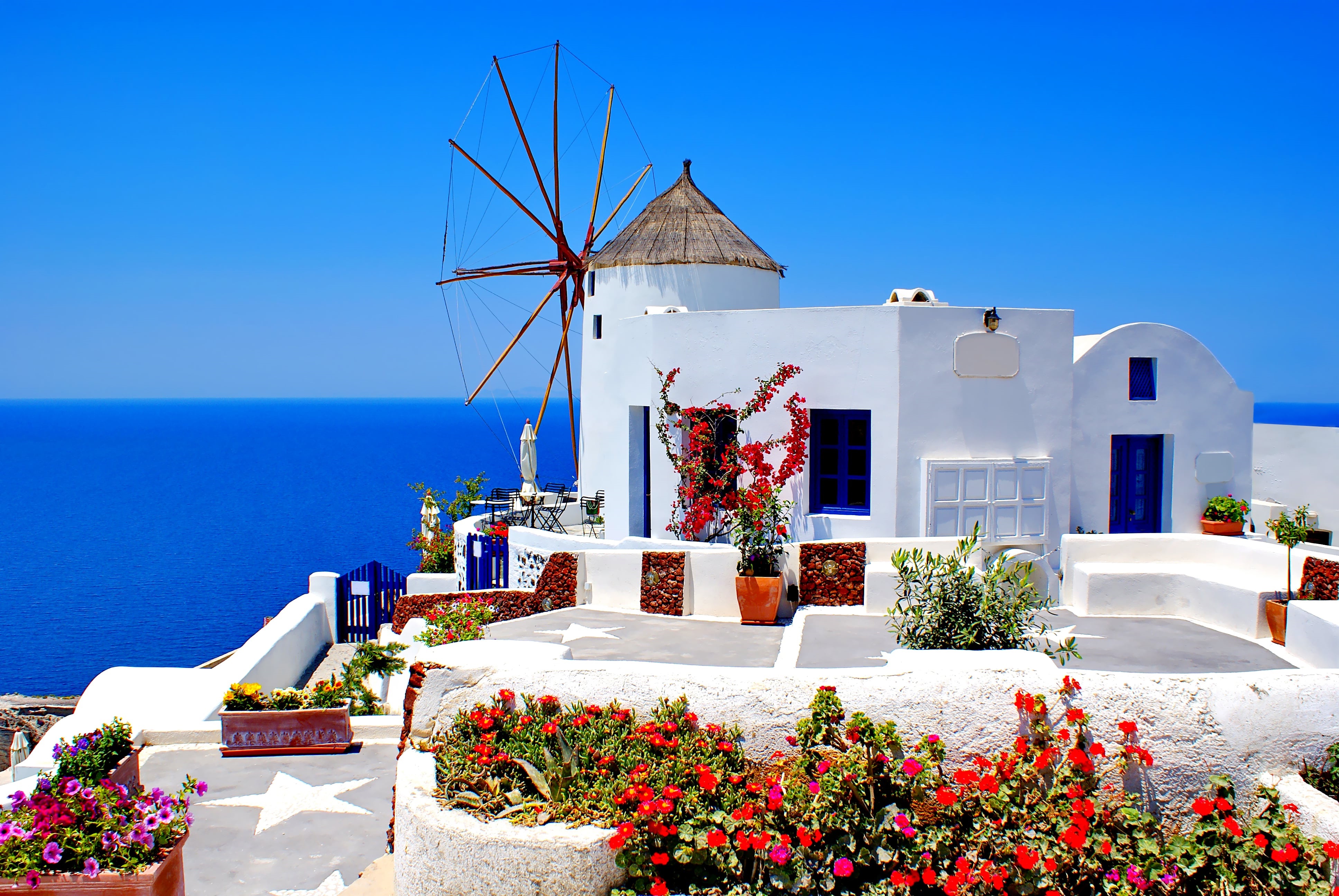 Not a single island but a compact archipelago, Santorini owes its rugged landscape to a massive volcanic eruption around 3,000 years ago that left a vast underwater crater framed by soaring cliffs. On the crescent-shaped main island, much-photographed villages of sugar-cube houses with signature blue domed roofs hug the caldera’s sheer sides. In the northwest, tiny Oia is a maze of narrow streets lined with galleries, shops and restaurants – and the sunset vistas from here are stunning – while the diminutive capital Fira is the place to come for a dose of history at a brace of museums, including one that houses artefacts from the nearby ancient city of Akrotiri. This Bronze Age settlement was buried in volcanic ash during the eruption, and you can still see original frescoes as you wander around the ruins. More energetic visitors will be keen to check out the scenic six-mile hiking trail between Fira and Oia, before relaxing on beaches of black or red volcanic sand. Escape to Perivolas Villa - The Hideaway on the tranquil island of Therasia for a hideaway with character and sublime views. Erossea, a private villa in the village of Imerovigli, is located on the highest point of the island and affords spectacular caldera views. 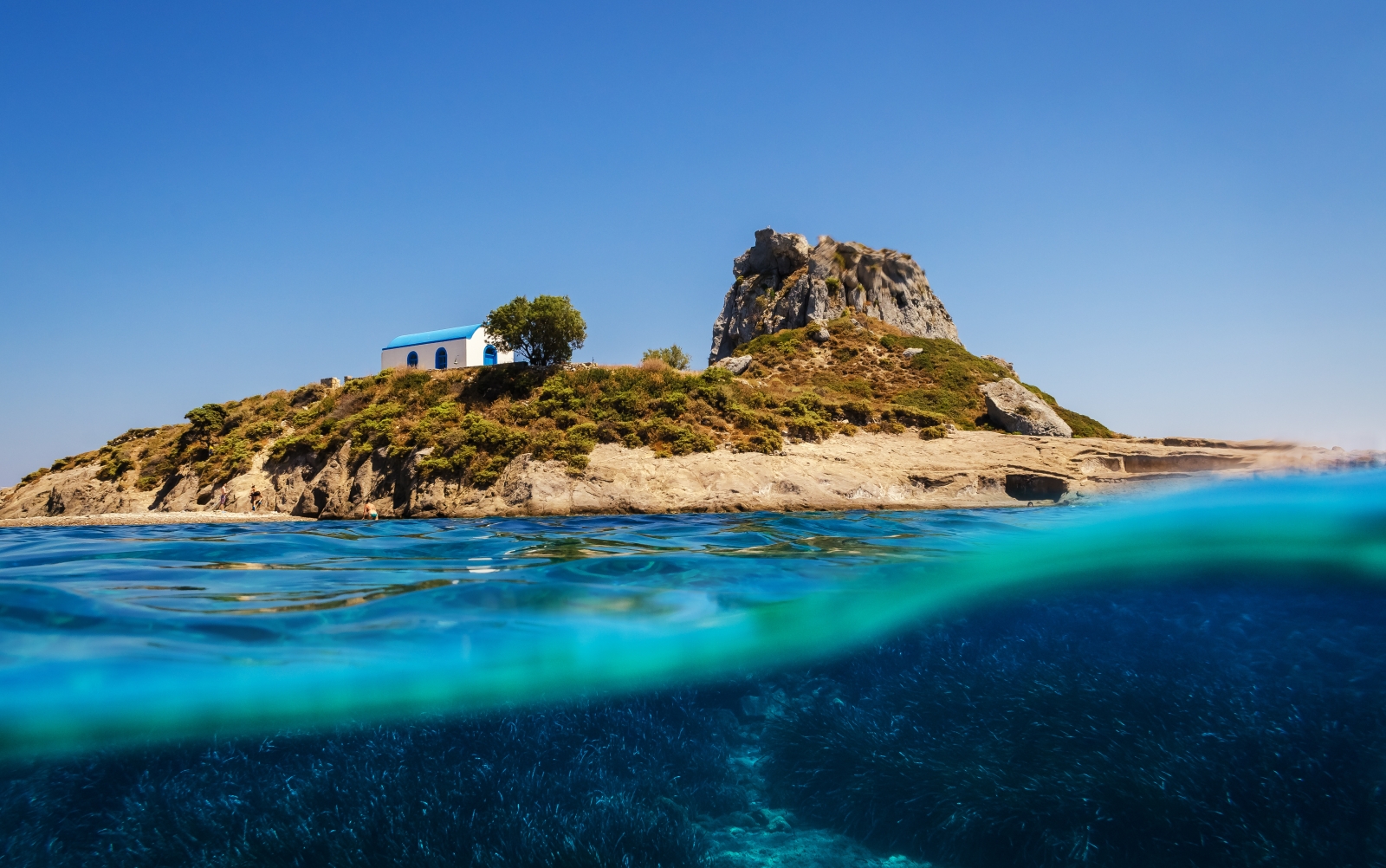 Poised between two pincers of the Turkish mainland, the closest less than three miles away, Kos is one of the most visited of the Dodecanese islands. Its gloriously long white-sand beaches – of varying degrees of liveliness – are the main draw, but definitely not the only one. History lovers have a multitude of opportunities to delve into the distant past in Kos Town, which is liberally scattered with ruins: the ancient Greek agora complete with shrines and temples, a Roman villa’s mosaic floors and an early Christian basilica, all overseen by an impressive Byzantine castle. Pause at one of the tavernas and cafés lining the vibrant port – from where you could island-hop to Rhodes, Kalymnos, Patmos, Syri and Leros – before continuing the discoveries at nearby Asklepieion, formerly an important religious sanctuary devoted to the god of healing. Base yourself at the chic beachside Oku Kos, designed to look like a Greek village, whose adults-only policy helps ensure serenity. 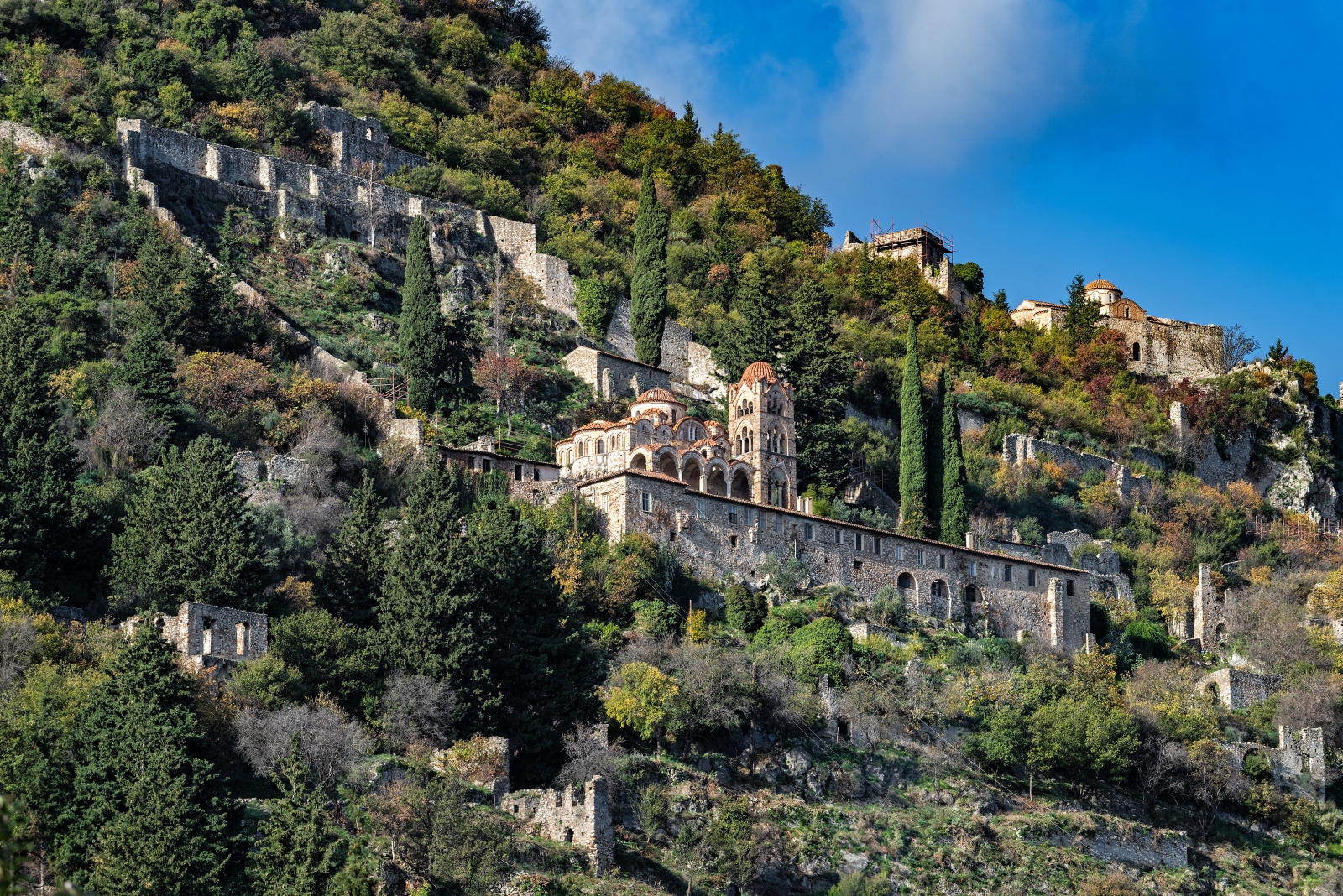 The place the ancient Greeks called Moreas, or ‘mulberry leaf’, is an Ireland-sized mountainous peninsula that was connected by a narrow isthmus to the rest of the mainland until 1893 when a new canal made it effectively an island. Emulate the well-heeled Athenians and make a beeline for picturesque Nafplio – via the ruins of Mycenae where Agamemnon reigned – to explore the winding lanes of its Old Town and Venetian fortress and enjoy the seaside tavernas. Inland, clinging to a steep hillside, is the crumbling medieval town of Mystras, now a World Heritage Site. It’s supremely atmospheric, with cobbled alleyways leading up past tiny churches with peeling Byzantine frescoes to a castle. The road west from here winds through the dramatic Tayetos range to the coast at Kalamata, of olive fame, whose many historic buildings include a monastery famous for silk-making. Or discover the delights of the southeast at Kinsterna, a sensitively restored 13th-century mansion turned boutique hotel, from where you can look out over the fortified town of Monemvasia. 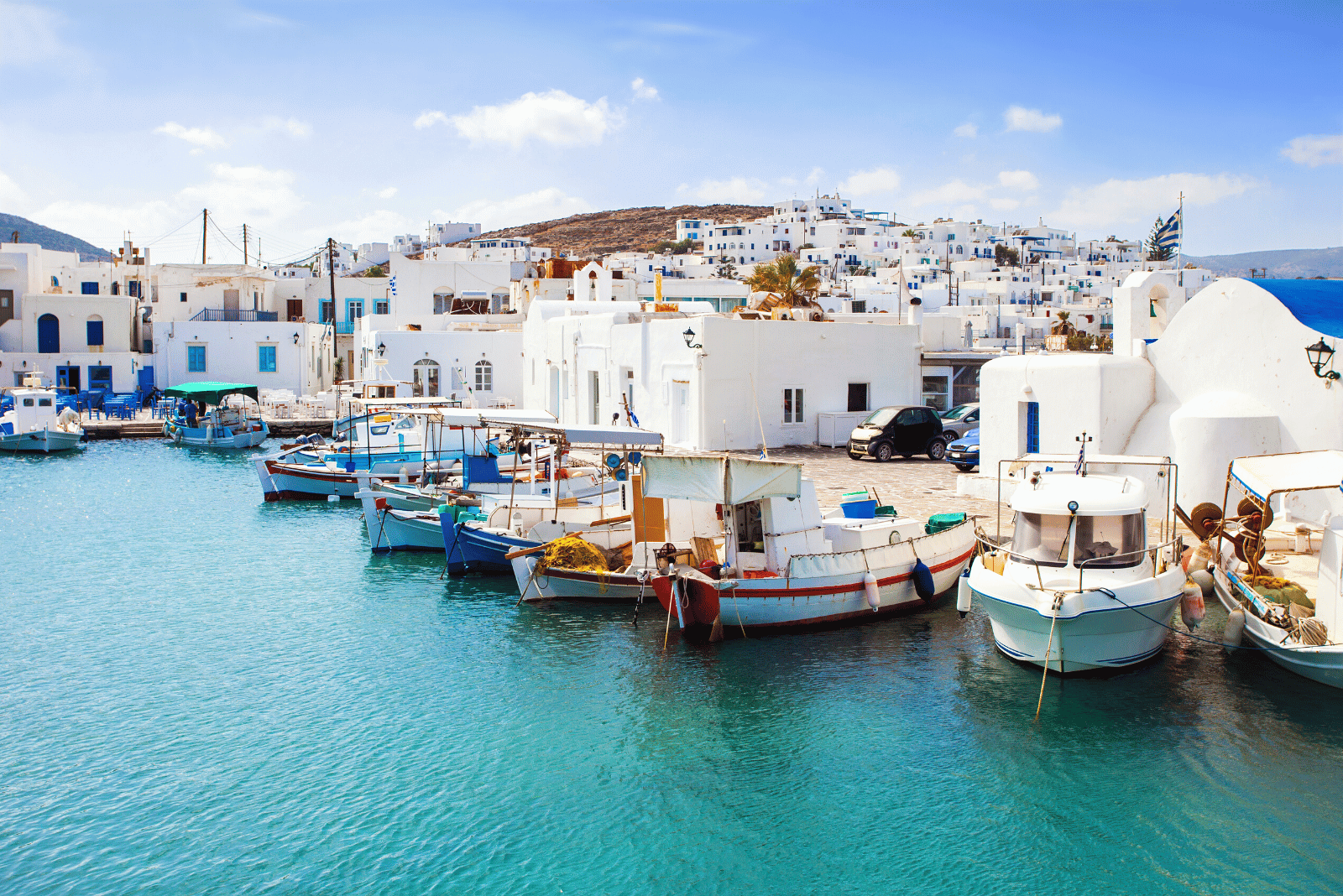 The neighbouring Cycladic islands of Paros and Antiparos bring together many of the elements of an idyllic sun-drenched holiday, from squeaky-clean beaches to photogenic villages. Parikia, Paros’s main port and capital, is almost absurdly pretty with its blue-and-white houses, cobbled paths and fourth-century Byzantine church, and history buffs will appreciate its archaeological museum, too. On the north coast, Naousa is a more cosmopolitan place to stay thanks to its excellent restaurants and shops, plus easy access to Kolymbithres Beach, a line of tiny sandy coves framed by weathered granite boulders. Head inland to discover another scenic village, Lefkes, set among olive groves and pine-draped hills, then continue to the southeastern coast to find bays made for windsurfing and kitesurfing. For a complete change of pace, Antiparos offers sleepy charm, seaside tavernas serving local dishes and relaxed places to stay such as The Rooster, with its appealing ‘slow living’ ethos. 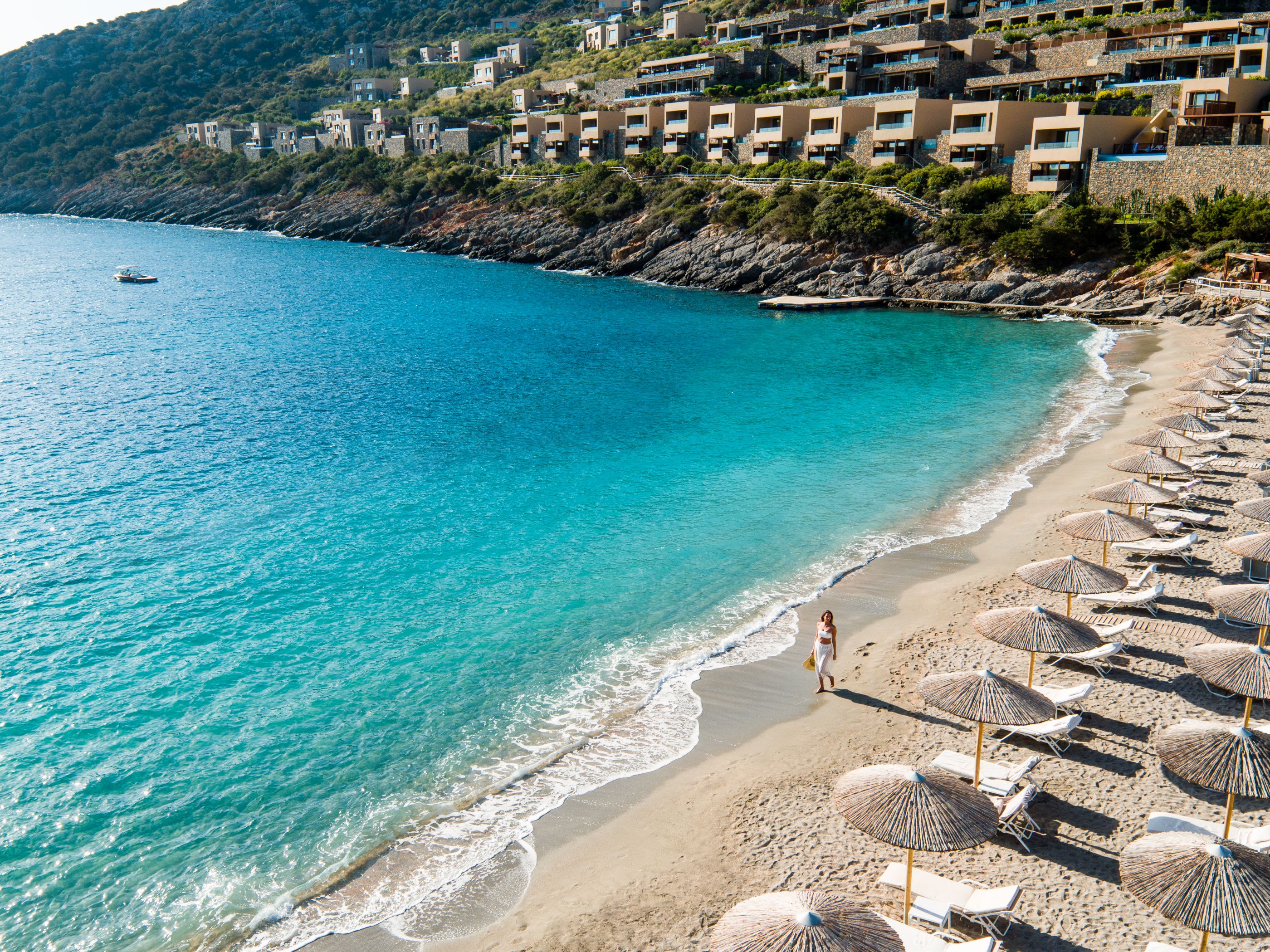 On the southern edge of the Aegean Sea, Greece’s largest and most populated island has been inhabited for at least 130,000 years. Just south of the modern port city of Heraklion, Knossos was the hub of the sophisticated Bronze Age Minoan civilisation, and the five-acre complex is a labyrinth of courtyards, frescoed rooms and colonnades. From this midpoint on the north coast, the road east leads to bustling Agios Nikolaos and, built into a hillside just beyond it, the family-friendly Daios Cove overlooking Mirabello Bay. Continue east to the former fishing village of Elounda, from where you take a boat to visit Spinalonga, a former leper colony. In the opposite direction, at the western end of the island, Chania’s atmospheric Old Town spreads out from the 14th-century harbour built by the Venetians. Villa Filira is set in the olive laden slopes of western Crete and ideal for accessing the nearby coastal village of Kolymbari. The verdant gorges and rocky peaks of the alpine interior, meanwhile, attract keen walkers, especially in the cooler spring and autumn months. 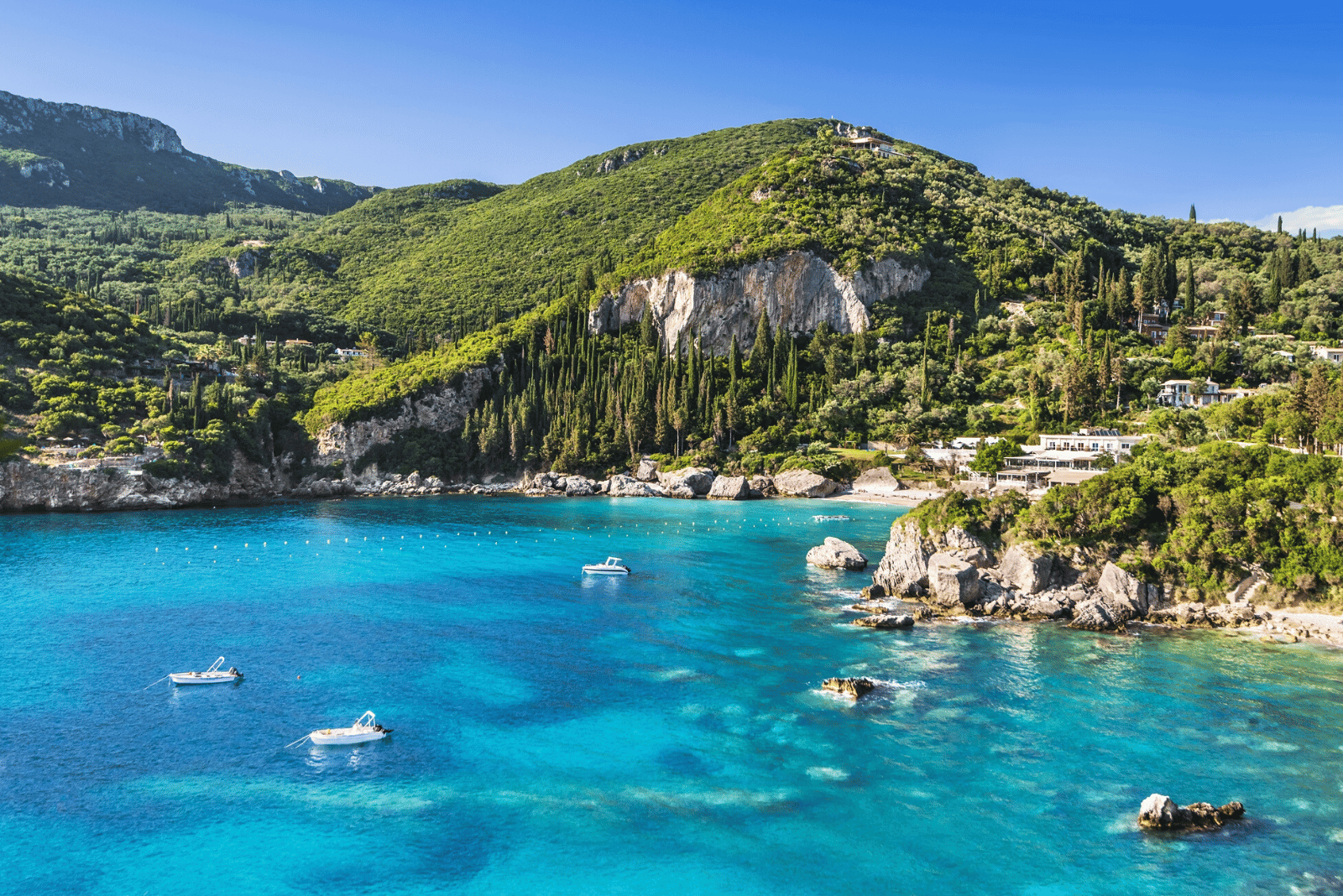 The Ionian island where naturalist Gerald Durrell spent much of his unconventional childhood only became officially Greek in 1864, after centuries of foreign rule. The Venetians, French and British, in particular, left their mark in various ways, creating a unique cultural landscape. The UNESCO-listed Old Town of Corfu has buildings whose arches are decidedly Venetian, as are the fortresses built to protect the harbour; the Neoclassical houses and vast plaza with its cricket field couldn’t be anything but British; while the elegant arcade on the square’s northern side is the work of a French architect. Away from the town, it’s the island’s superb beaches that attract attention; the most famous is the intimate Canal d’Amour, hemmed in by cliffs, where legend says those who swim together are destined to fall in love. Some of the best villas are on the northeast close to the harbour village of Kassiopi; Villa Icarius, for instance, has its own jetty and is near a beach with a watersports centre.