Morocco is a country of contrasts. Relax on the laid back shores of Essaouira, explore the bustling medina of Marrakech and sleep under the star-filled desert skies in the Sahara Desert. There's so much more than first meets the eye when exploring Morocco. 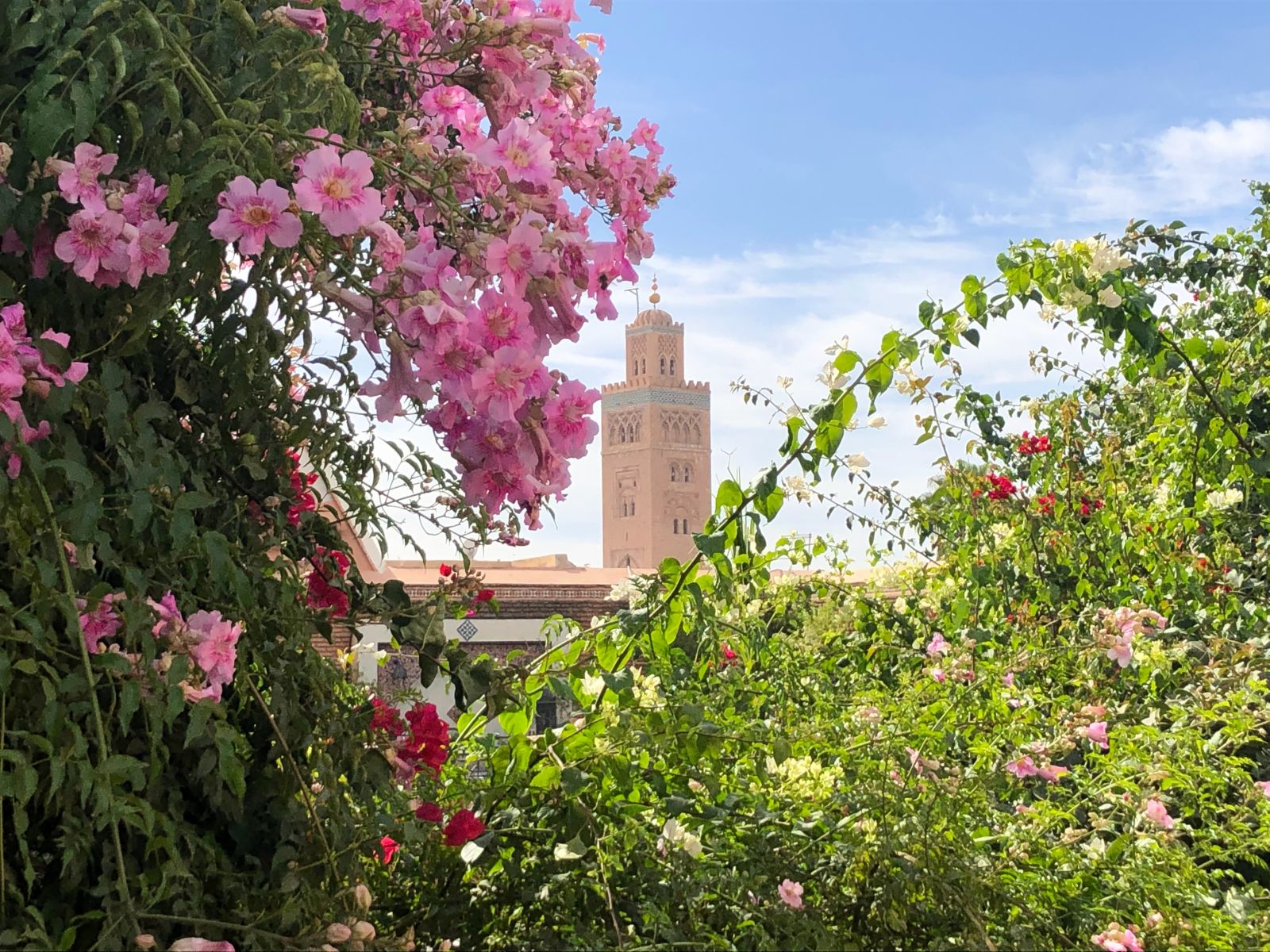 Without doubt one of Morocco’s loveliest cities, Marrakech is full of character and packed with fascinating palaces, gardens and mosques – including the 12th-century Koutoubia Mosque whose Moorish minaret is visible for miles. Most visitors make a beeline for the medina with its colourful souqs (haggling is a given) and Djemaa El Fna Square, the city’s heart and soul, which is particularly atmospheric after dusk when the food stalls set up. Perhaps equally famous is the Jardin Marjorelle; created by an artist in 1924 and bought by Yves Saint Laurent in 1980, it’s a wonderful combination of gardens and an art studio turned Berber Museum. For those interested in history, a visit to the Saadian Tombs – a richly decorated royal necropolis created by Sultan Al Mansour that was later walled up and forgotten until its discovery in 1917 – is also a must. Stay at The Oberoi Marrakech, a tranquil oasis a short drive from the medina, which is set in 28 acres of gardens, orchards and olive groves. Alternatively, choose a traditional riad close to the souks, such as Riad Farnatchi. 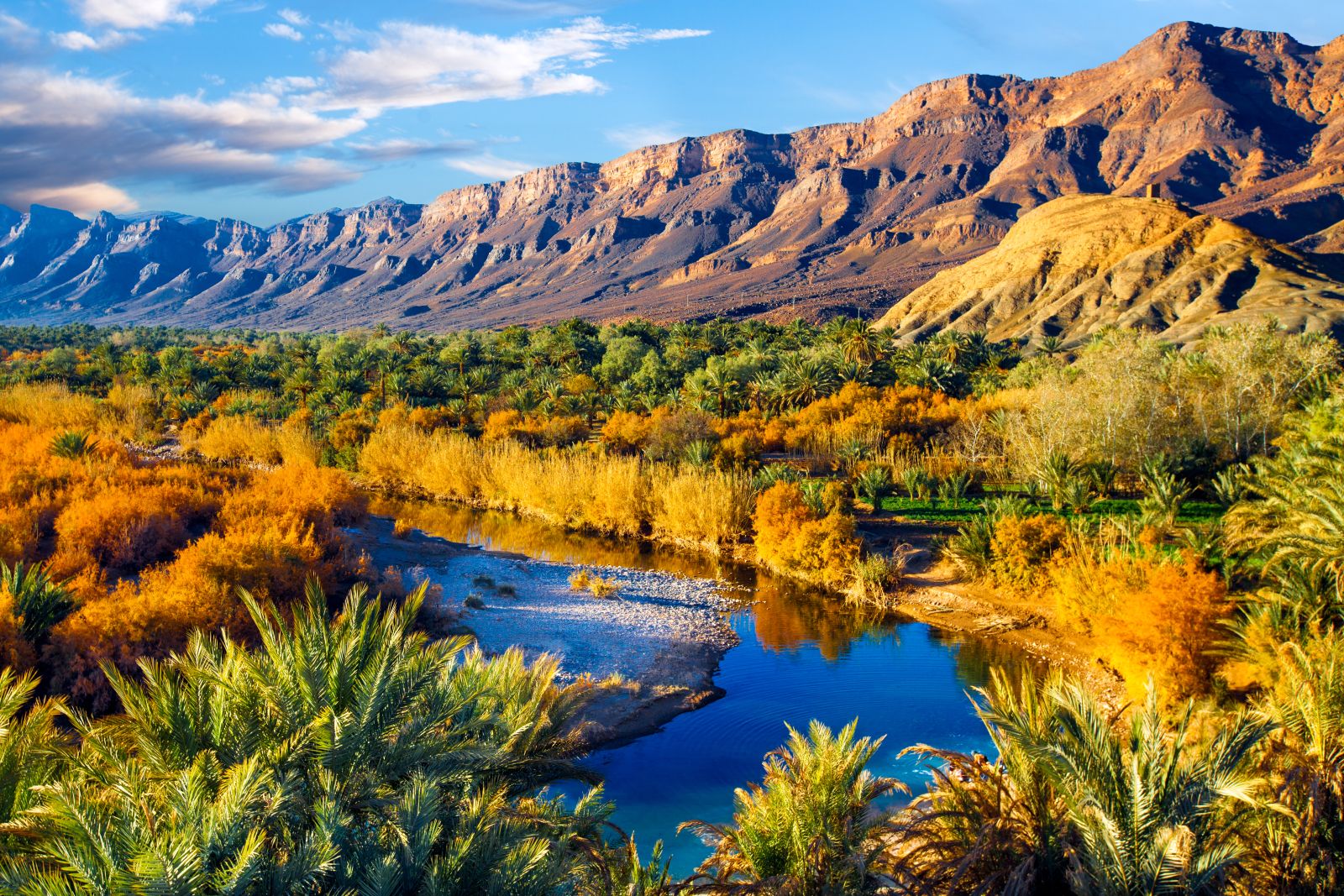 Separating the Mediterranean and Atlantic coastlines from the Sahara Desert, the Atlas Mountains are simply stunning (no wonder they have been used as a location for films such as Kingdom of Heaven, Seven Years in Tibet and Gladiator). There are several ways to explore: on foot, 4X4 or even by mule. For instance, a guided walk might take you through a shaded pine forest to the village of Tagadirte where you can meet a Berber family (the Atlas Mountains are primarily inhabited by Berbers) before continuing past the salt vats. At the heart of the mountains is the Imlil Valley. Well known for its walnuts, apple and cherry production before the advent of mountain tourism, now it’s a popular starting point for walking adventures. The best time to walk in the Atlas Mountains is April to October, subject to altitude. Kasbah Tamadot is one of the best places to stay. 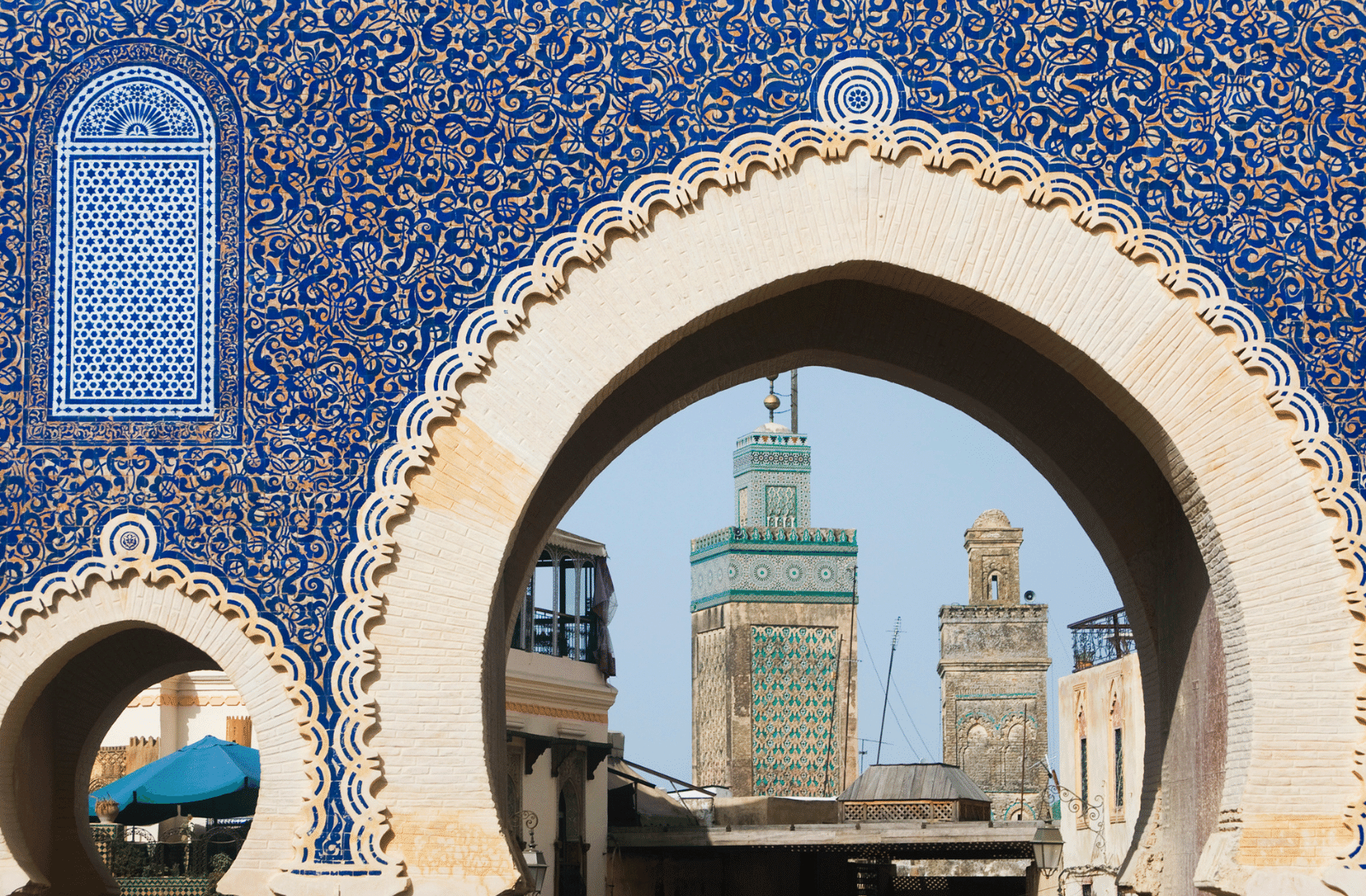 The third largest city in Morocco, with a population of around 1.15 million, Fes is sometimes referred to as the Athens of Africa. Historically the cultural capital, and home to creatives and intellectuals, it is centred around the Fez River. There are two UNESCO World Heritage medina quarters – Fes el-Bali and the smaller Fes Jdid – both of which are worth exploring for their warren of streets, well-preserved architecture, monuments and mosques. In contrast, the Ville Nouvelle area, which was established during the French colonial era, is far more modern. Since the city's foundation, the leather tanning industry has been continually operating in Fes and is considered one of the main attractions. The Chouara Tannery, which dates from the 11th-century, is one of the oldest in the world. The best time to visit Fes is spring and autumn. Hotel Sahrai is a tranquil retreat only minutes from the bazaars of the medina. 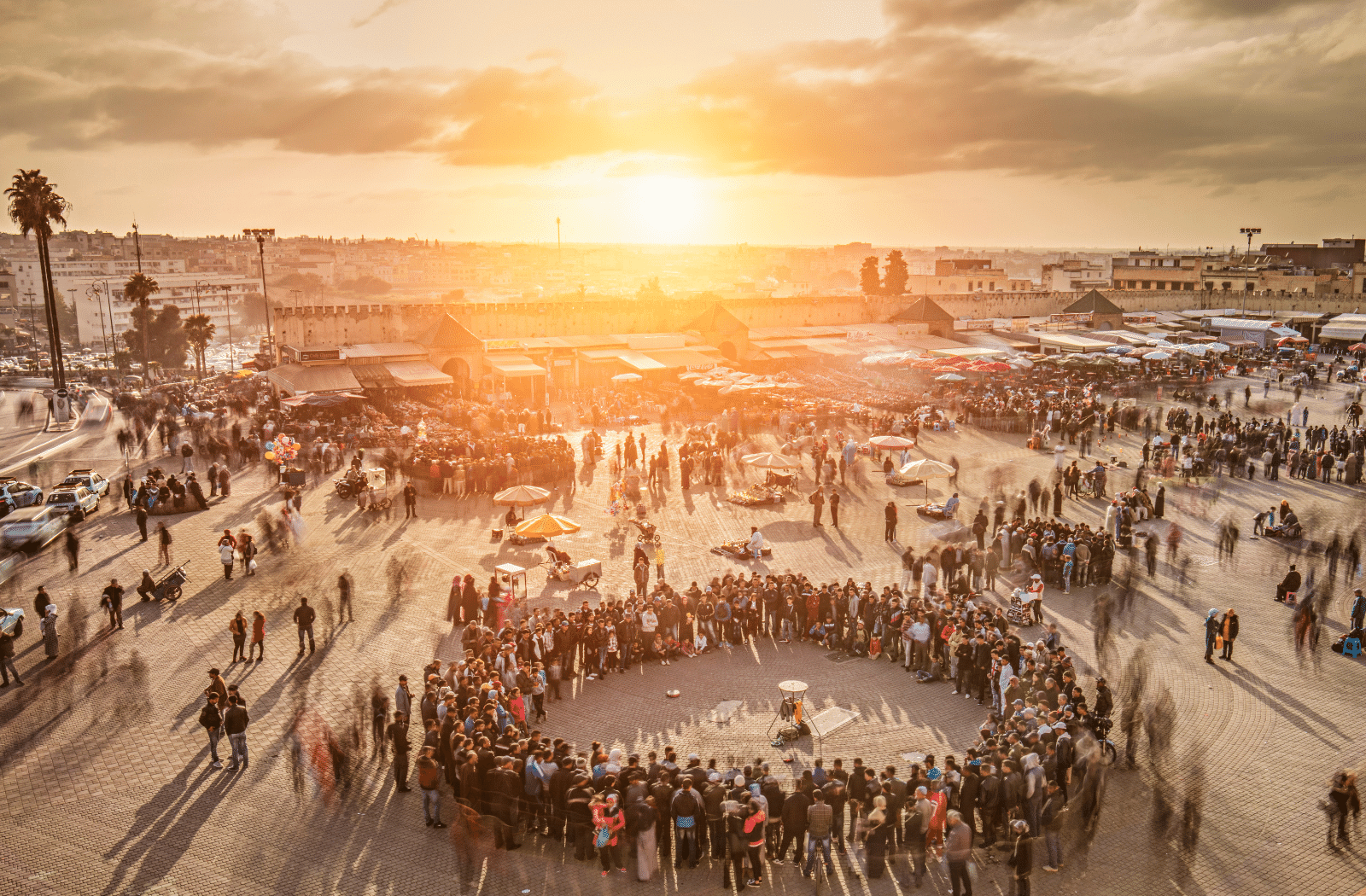 Located near the Middle Atlas Mountains in northern Morocco and nicknamed the 'Imperial City,' Meknes has a fascinating centuries-old past. Now a vibrant city that rivals the likes of Rabat and Fes, it’s packed full of bustling souks, mosques, and madrasas. A UNESCO World Heritage medina (most visitors begin exploring from the Place el-Hedim) is complemented nicely by the more modern Ville Nouvelle area. No visit here is complete without also seeing nearby Volubilis, the site of a thousand-year-old Roman ruins, with an ancient triumphal arch and beautifully preserved mosaics. 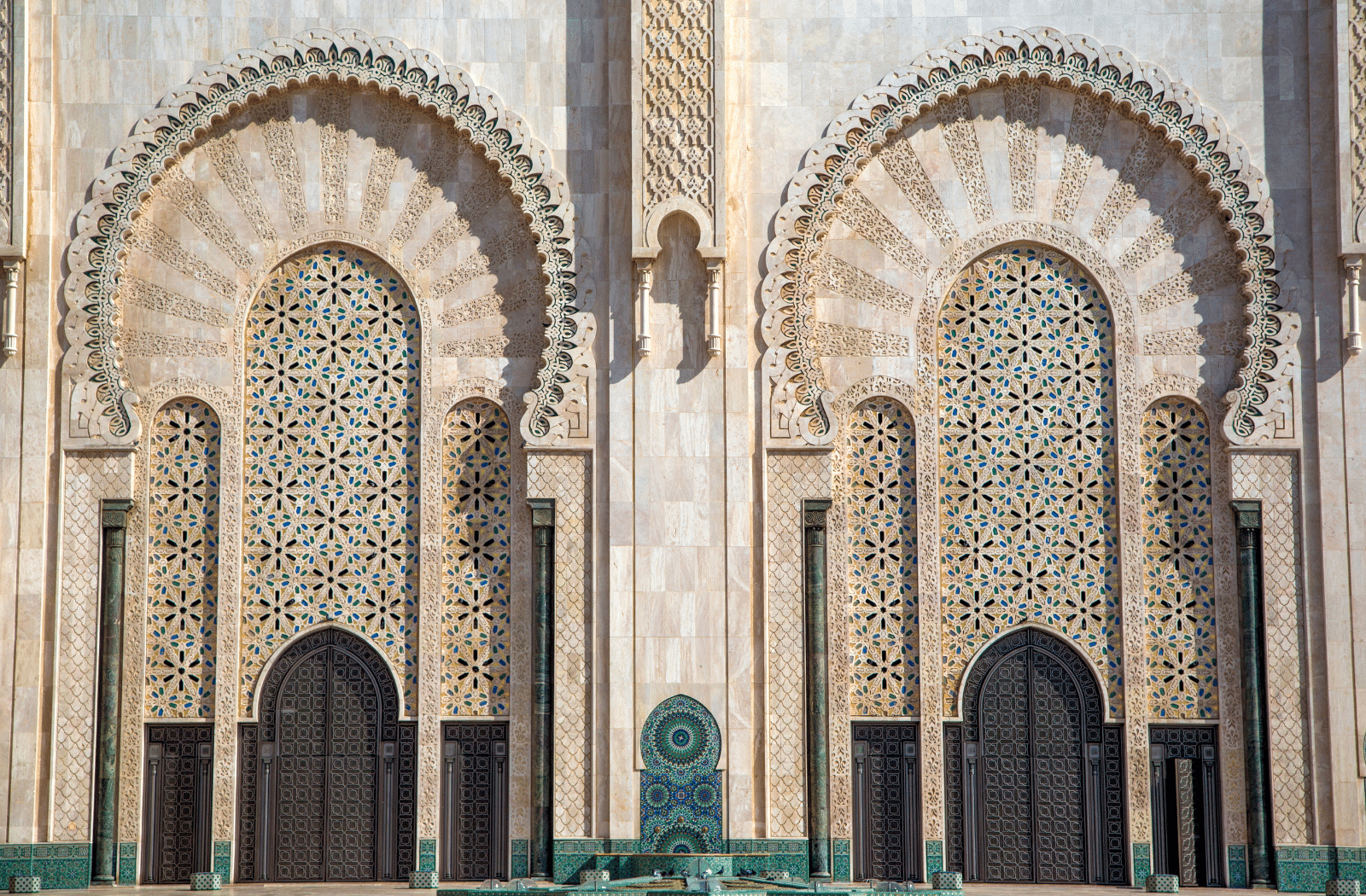 Morocco’s cool commercial capital sits right on the Atlantic Ocean in the west of the country. Palm tree-lined avenues and modern office buildings sit next to Mauresque architecture that nods to its French colonial past, as well as Moorish and European Art Deco influences. The most prominent landmark here is Hassan II Mosque, the second largest functioning mosque in Africa, which was built on a promontory over the Atlantic Ocean (the seabed is visible from the glass floor in the great hall). Take a guided tour, then head to Casablanca’s Old Medina, which feels like stepping back in time. 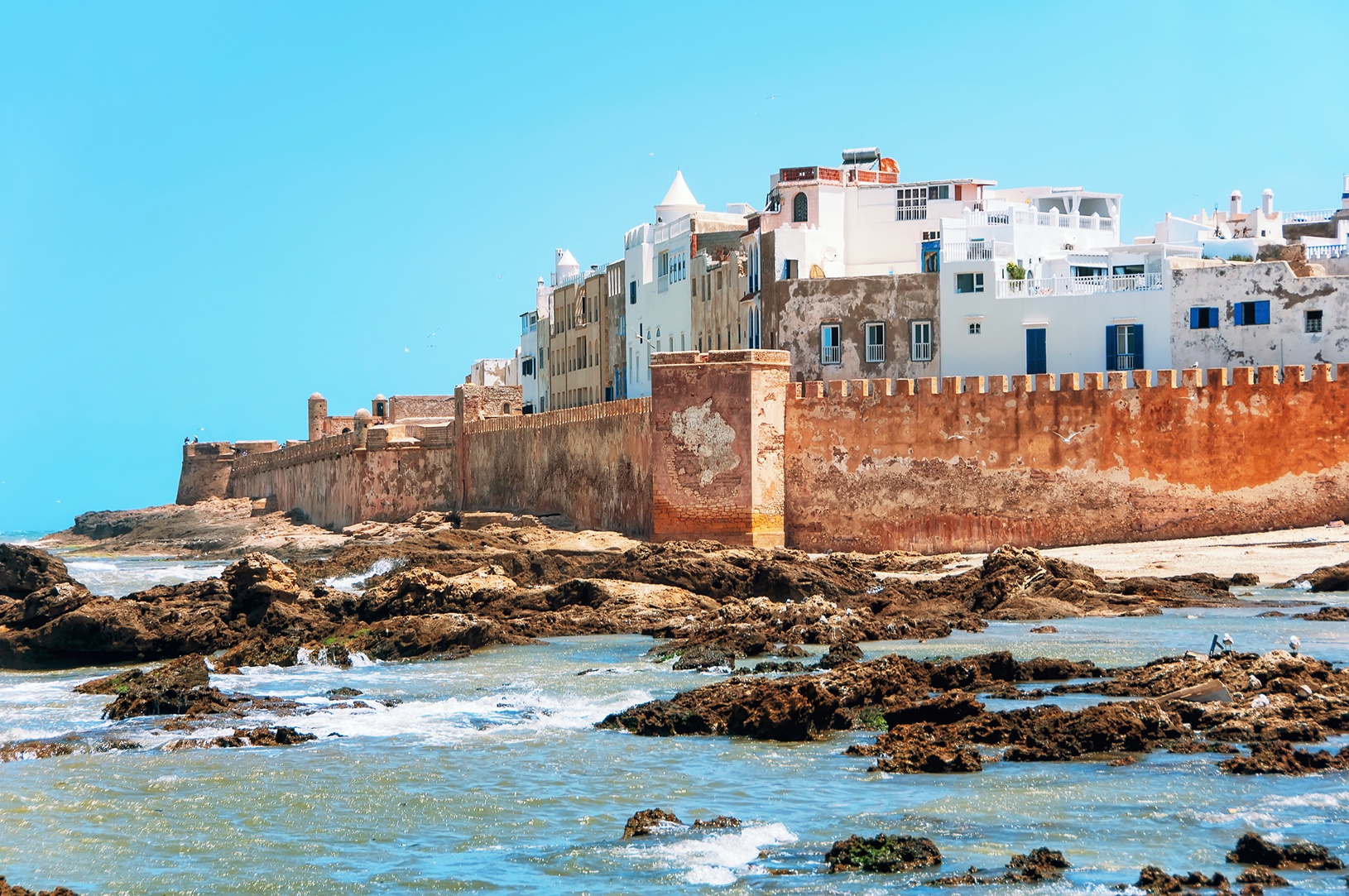 A fabulously laid-back coastal city, charming Essaouira is an ideal spot to slow the pace after the frenetic buzz of Marrakech. Popular with kite surfers and wind surfers who come here to catch the waves off Essaouira beach between April and November, it’s also a joy for those who simply wish to wander through the medina, browsing the art galleries and boutiques (protected by 18th-century seafront ramparts, the medina was listed as a UNESCO World Heritage Site in 2001). Marrakech to Essaouira is around a three-hour drive. 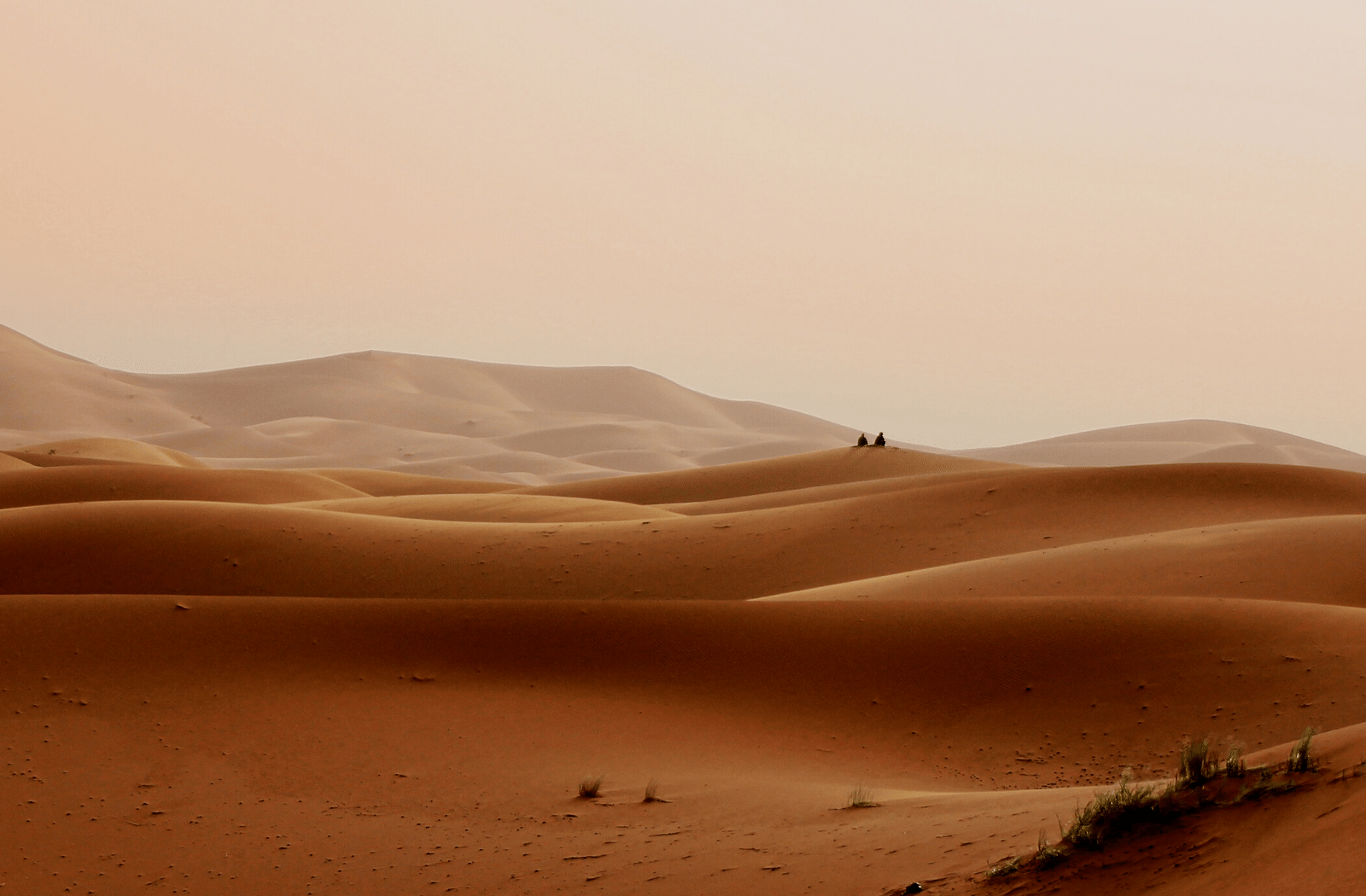 The epic sand dunes of the Sahara – the largest hot desert in the world, covering eight percent of the earth’s land – rise up to 180m high, and really are a terrific sight to behold. Set in the east of Morocco, the Sahara Desert butts up to the Algerian border, and is home to a myriad of creatures such as camels, foxes, gazelles and monitor lizards. Stay in a luxury camp at the edge of the dry lake of Iriki, experiencing nomadic life and sleeping under vast starry skies at night.

To find out more about planning your luxury holiday to Morocco, get in touch with Red Savannah's Morocco travel specialists on +44 (0) 1242 787 825.